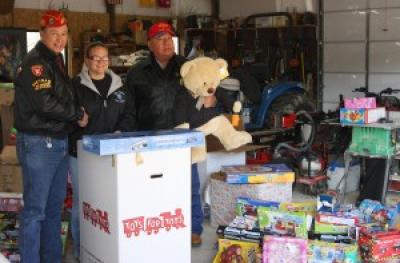 The Osage Detachment No. 669 of the Marine Corps League, in conjunction with a Broken Arrow-based Marine unit, gave out hundreds of toys to county children on Dec. 18 as part of the annual Toys for Tots Christmas tradition. This year, the Osage Nation Social Services Agency is among those benefitting from the toy drive because the ongoing tribal budget impasse is limiting its spending on presents for its underage clients.

The Toys for Tots program, which targets needy children, comes at a crucial time to the Osage Nation because its 2010 fiscal year budget has yet to be passed. As a result, the Social Services Agency is not able to buy Christmas toys for 19 Osage children – currently in tribal custody – because of the one-twelfth government spending restriction in place.

“We weren’t able to provide the toys like last year,” said Eddie Screech Owl Jr., a social worker supervisor for the Nation. Each year, the Social Services Agency buys toys during the Christmas season for children in tribal custody who are in pre-adoptive placements, on the Family Preservation Program caseload, and those identified as needy during child welfare investigations, according to agency director Lee Collins.

On Friday, officials with the Marine Corps League were joined by Marines with the Anti-Tank Training Company Headquarters, 4th Marine Division as they distributed about 1,200 toys around Osage County. The Toys for Tots effort visited communities including Hominy, Barnsdall, Skiatook and Pawhuska.

“There’s toys in here that people cannot afford to buy and we’re giving them away,” said John Henry Mashunkashey, junior vice commandant for the MCL Osage Detachment. “If they send us word that they’re short on toys then we’ll contact the Anti-Tank Training Company and get toys,”

Since the 2008 fiscal year, Osage Nation Congress has approved funding requested by the Executive Branch for the Social Services Agency to be able to provide Christmas, birthday and graduation gifts for Osage children on the program’s caseloads.