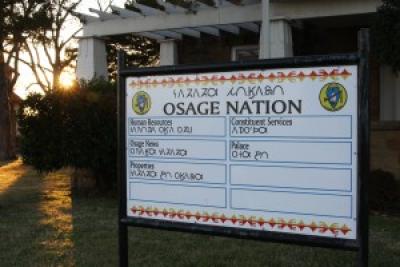 The sign in front of the former Superintendent’s residence on the tribal campus in both English and Osage languages is one of a few across the reservation aimed at making the tribe’s first language more visible. Plans to add more dual language signs are being mapped out.

“Signs are everywhere and are a key of identity for the Osage language,” said Rebekah HorseChief, a recruiter and instructor for the Nation’s Language Department. She approached the Nation’s Properties Department about incorporating the language orthography into signs on the present campus as well as the master plan for a new campus, which is still in the works.

“Because the campus is the property of the Osage Nation, we have the power and sovereignty to implement our language objectives,” she said, adding she’s also worked with the Nation’s Palace Grocery store on making signs to identify food and merchandise and “anything we can label.”

Bruce Cass, the Nation’s Properties Department director, said the sign in front of the former Superintendent’s residence, and a few others recently put up around campus, are made with temporary materials so the signs can be easily altered if a department needs to relocate.

“They can be changed as needed,” Cass said. “We’re experiencing a lot of growth as everyone knows and when (tribal departments) need to move due to growth, it’s inexpensive to change,” he said.

HorseChief said similar efforts by Indigenous people worldwide, including other Oklahoma tribes, helped fuel plans to make the Osage language more visible so it can be recognized, and spoken.

“I’ve seen the potential of what our future is in New Zealand,” HorseChief said of visiting the country in 2005 and observing the Indigenous people’s language revitalization efforts. The Maori “were where we were 20 years ago,” she said.

In Oklahoma, HorseChief, who is also Pawnee, said the tribe has also created roadside signs in the Pawnee language, which is something she would like to see the Osages do on the reservation.

Cass said the Master Plan for an updated government campus is still in the works and Osage/ English signage will be taken into consideration as that project continues to develop. A public meeting on the project will be scheduled next month to gather feedback, he said.