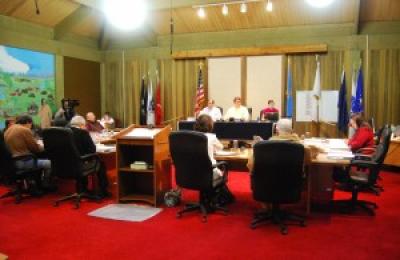 Congress proposes bill to trim Osage budgets to $23.9 million and to halt all raises and new hires

A bill sponsored by Congressman Mark Freeman that would trim the Osage budgets down to $23.9 million was discussed by Congress Monday, as well as putting all employee salaries back to 2009 levels allowing a 3 percent step increase and halting all new hires.

Freeman expressed that he did not like the bill but he felt it was necessary to introduce a bill that would be a compromise with those members of Congress that want the budget below $25 million.

According to Congressman William “Kugee” Supernaw, in his Dec. 14 and Dec. 23 e-mail newsletters, the reason for certain members of Congress’ persistence in lowering the Osage budgets to below $25 million is due to the accounting debacle at the Nation’s casino and “the fact that the Nation has not received a cash distribution from the gaming operation since the check for May 2009.”

“The lack of income distributed to the Nation is a major part of the budget problems the government is facing and it has only been mentioned in the Notes to the Nation,” Supernaw wrote Dec. 14. “Yet it is affecting all of us.”

Gaming Enterprise Board chair, Elizabeth Homer, said in a phone interview Monday that there has been a “terrible, terrible unfortunate misunderstanding . . . we, the Nation’s gaming enterprise, did not stop making money – actually, ’09 was a good year.”

Homer, who replaced Tom Slamans as gaming board chair Nov. 24, said that it’s true there was not a gaming distribution for the months of July and August but it wasn’t due to lack of money. According to end-of-year financial records, the Nation’s gaming enterprise paid the Nation approximately $1 million more than projected for 2009 fiscal year.

“That’s why the payments trailed off at the end of the last year,” Homer said. “A distribution for the first two months of this year, which began Oct. 1, was made in early December totaling $5 million for October and November. From this point forward, the enterprise will be making distributions of $2.5 million monthly, which will spread the distributions out over the course of the entire year, providing, we hope, less confusion and a greater sense of certainty.”

The enterprise will conduct quarterly reconciliations, a process that compares two sets of records to usually balance two accounts to make sure they’re in agreement, between revenues and distributions as well as an annual reconciliation at the end of the fiscal year. The reconciliation at the end of the year could entail an adjustment, but according to Homer, based on current projections the board anticipates a final payment for the 2010 fiscal year of at least $1 million to bring the total distribution for 2010 to the $31 million projection.

Congressman Supernaw maintains in his e-mail newsletters that the “accounting mess” is unresolved and that any projections received from the gaming enterprise board in the immediate future are unreliable.

Homer said she has nothing but good news about the accounting process at the Nation’s gaming enterprise.

“Part of the problem we’ve experienced is attributable to the transition from an outsourced accounting function to an in-house accounting department that took place in the middle of Fiscal Year 2008,” Homer said. “Hindsight being what it is, it’s easy to look back and see that things could have and should have been done differently – the timing was off, more staff support and training was needed, and the transition was too abrupt.”

Casino staff struggled with the new, advanced system and Homer said that the staff probably should have run the two systems concurrently, at least until the accounting department was adequately staffed and trained and the new accounting system was in place.

“Bottom line, that’s why the annual financial audit for the 2008 fiscal year turned out so poorly,” Homer said. “It was never that the casino lost money: it was that the accounting function was in such poor shape.”

“The good news is that by bringing in accounting professionals, beefing up the staff, getting the staff trained, and implementing the right systems, all of which has taken place over the past year, we’ve made serious progress toward both overcoming and eliminating these problems,” Homer said.

The gaming board hired certified public accountants from the accounting firm of Joseph Eve, a nationally known CPA firm that specializes in accounting and business solutions for tribes and casinos. Joseph Eve CPA’s came in and trained casino staff in the new accounting system and the staff has benefited so much from Joseph Eve that the accounting department should be fully independent by the end of the 2010 fiscal year, Homer said.

The Osage Nation Gaming Commission hired an independent auditing firm, REDW out of Albuquerque, N.M., “a firm with significant experience in tribal casino auditing,” according to Homer. The firm performed a re-audit of the enterprise’s 2008 fiscal year balance sheet. The re-audit was completed in November and the result was an unqualified opinion. “What this means is that we have a good, reliable beginning balance for FY 2009.”

An unqualified opinion, according to allbusiness.com, is the auditor’s judgment that he or she has no reservation as to the fairness of presentation of a company’s financial statements and their conformity with Generally Accepted Accounting Principles (GAAP). In the auditor’s opinion, the company has presented fairly its financial position, results of operations and changes in cash flows.

“The installation of these two systems represents major progress toward achieving the highest degree of accountability and profitability of Osage gaming,” Homer said. “It is distressing that these [accounting] problems have spilled over into the Nation’s budgetary process and that it has obviously shaken the confidence of many in relation to the gaming enterprise.”

“On behalf of the board, I can state unequivocally that restoring that confidence is our highest priority,” she said.

Before Congress adjourned Monday Congressman Doug Revard made a motion for Kelly Corbin, the Office of Fiscal and Performance Review’s accountant, to tally the savings the Nation would receive by halting all raises and new positions.

“I’m going to venture to say it would be in the interest of $150,000,” Corbin said. That’s if the bill gives all employees 2009 level salaries, plus the 3 percent increase, which Corbin said was reflected in 90 percent of the budgets in Freeman’s bill.

Congressman Supernaw brought up the fact that Congress’ budget was passed in September, with some of their staff receiving more than 3 percent increases to their salaries.

“If I’m wrong, my understanding is the employees will still get the step increase, I still understood we were going to revisit our own budget and cut out $300,000 from expenses and even adjust the wages back,” Supernaw said. “I don’t think it’s fair to cut everybody else and not ourselves.”