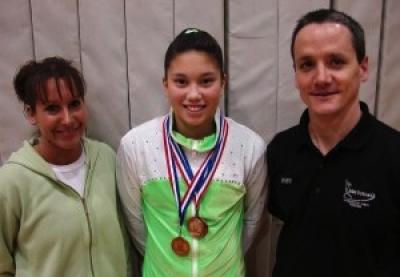 BARTLESVILLE, Okla. – Jaelyn Olsen started competing in gymnastics when she was five and met another Osage gymnast who’s helped her along the way as a coach. Now she competes as a Level 10 gymnast in gymnastics events nationwide.

“I saw it on TV and said I want to do it, I like to tumble,” the 15-year-old Osage said of her first interest in gymnastics. Jaelyn, 15, who attends Putnam City West High School in Oklahoma City, works with Jeff Carter and his wife Trish Carter, who are both coaches and owners of Mat Trotters Gymnastics Center also in Oklahoma City. “She’s a hard worker, knows what it takes,” Jeff Carter said of Jaelyn while they attended last month’s USA Gymnastics Oklahoma State Sectional Meet where Jaelyn and several other Mat Trotters gymnasts performed.

“She’s only a sophomore and a lot of college coaches are looking at her. Our focus right now is to get a scholarship with her talent,” said Carter who grew up in Pawhuska.

Jaelyn performed on the uneven bars and balance beam at the event in Bartlesville while recovering from a sprained ankle injury. She didn’t compete during the floor and vault events to avoid aggravating the injury and left the competition with three medals for her performances.

Her father, Biff Olsen, says their home has “hundreds of medals accumulated over the years” from Jaelyn’s competitions. “There’s probably no other sport that puts in hours as gymnasts do.”

“There’s never really an off-season,” Carter said. “Training still takes place in the summer, the sport’s always changing and skills can get bigger and better.”

Carter and his wife Trish Carter started gymnastics during childhood, both attended OU where they met in 1986 and have won several honors for gymnastics. They have been married since 1990 and have a daughter named Carley. Jeff Carter competed at the state, region and national levels from 1981-1987. He was an All-State gymnast from 1983 to1986 and received the Outstanding Gymnast Award in 1986. Trish Carter is from Puerto Rico and came to OU in 1986 after attending Oklahoma State University, which dropped its gymnastics program that year.

The Carters have been coaching at Mat Trotters since 1992 and became the gym’s owners in 2001. Jaelyn finds bars to be the most challenging of the four gymnastics events.

“Physically it’s the hardest event,” she said adding gymnastics is the only sport she trains in. Jaelyn’s parents know it takes a lot of training and practice to compete in sports. Her mother, Mary Olsen, played basketball while she attended the University of Oklahoma and Biff Olsen wrestled during high school. Mary Olsen says it takes hours to practice for a major gymnastics event that has eight minutes of competing time for gymnasts. Each of the four gymnastic events has two minutes of performing time for each gymnast.

“They’re judged on everything before they even hit the ground,” Mary Olsen said of the gymnasts. In the all-around floor exercises, “the girls have to be in sync with the music” played during the performance, she said.

When she’s not practicing at the gym or performing at gymnastics competitions, Olsen enjoys attending OU sporting events and dancing at powwows. At school, she maintains a 3.6 grade-point-average and enjoys English because she likes to read. Jaelyn’s resume includes several awards including honors for State All-Around Champion for: Level 4 in 2002; Level 5 in 2003; Level 7 in 2004; and she was the Level 8 State Champion in 2005. In 2008 she was a Level 10 Junior Olympics Nationals Alternate and won at the JO Regional Qualifier that year.

Jaelyn will head to Plano to perform at a two-day college-bound workshop in June, which will have college coaches watching the athletes, he said.