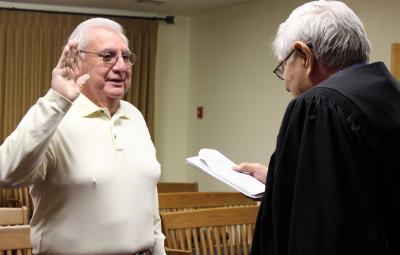 TULSA, Okla. – Osage Nation Principal Chief John Red Eagle appointed a retired gaming industry worker to the Nation’s Gaming Enterprise Board. Aaron Bighorse, Osage, was sworn into his new post Feb. 15 at the tribal courthouse in Pawhuska and attended his first board meeting the next day at the Osage Million Dollar Elm Casino’s executive offices next to the Tulsa casino.

Bighorse joins Chairman Frank Oberly and vice Chairwoman Stacy Laskey on the three-member board and will serve as its secretary.

“Aaron brings significant tribal gaming experience to the board and the Nation is grateful for his willingness to serve the Osage people,” Chief Red Eagle said in a news release announcing the appointment.

Charles Lohah, the Nation’s Supreme Court Chief Justice, administered the oath of office for Bighorse on Feb. 15. Per the Nation’s gaming law, Bighorse will be subject to Congressional confirmation as an appointed gaming board member by the end of the next regular Congressional session. The Hun-Kah Session starts its 24-day run March 21.

“My uncle Aaron has extensive, extensive experience in the gaming field,” BigHorse said. “I know he started out back when they had high stakes bingo here in Oklahoma and he was right there on the cutting edge when we started in the casinos so I think he’ll be a real asset to our board… I know [Bighorse is] glad to be back in this area to contribute to the tribe.”

According to a news release from Chief Red Eagle’s office, Bighorse has 20-plus years of professional experience in the gaming industry, which includes working as an assistant manager supervising floor operations and restaurant services in a tribal casino. He’s also owned a bingo supply business and worked for Megabingo where he coordinated the installation of television satellite systems in Oklahoma tribal casinos, the release stated.

Bighorse also worked at Multimedia Games where he was involved in the introduction of high-speed Class II and Class III electronic gaming machines for 12 years before retiring. He is a 1963 Pawhuska High School graduate, according to a Web site dedicated to that year’s alumni.

Bighorse replaces Gene Big Soldier on the gaming board, who asked Chief Red Eagle to withdraw his name for Congressional confirmation for personal reasons, the release stated.