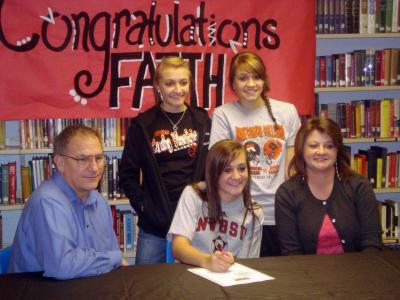 When she was in the first grade she came home from school with a paper in her hand that advertised a community soccer league.

At the time she lived in North Carolina, with her parents and two sisters Charity and Hope, where it all started.

“I used to play with my two little sisters on a little boys and girls team,” she said. “I started playing soccer when I was four or five, so [I’ve been playing] for about 11 years.”

And now, over a decade later, the 17-year-old Pawhuska High School senior has signed a letter of intent to play soccer at Northwestern Oklahoma State University.

Her numerous showcase appearances and cross-country tournaments helped her get the exposure she needed.

Her father Terry Kennedy has been along for the ride from the very beginning.

Kennedy said even though soccer was a foreign sport to him and his wife Chrissy, they supported Faith and her sisters in all the sports they wanted to pursue.

“I was the only dad, the rest of the kids all had their moms there,” he recalled at Faith’s very first soccer practice. “And I didn’t know the difference between a soccer ball and a volleyball. We don’t have soccer here in Oklahoma, I just didn’t know a thing about it.”

But because he was the only dad around all the other mothers he decided he would coach the team.

He’s coached Faith and her sisters ever since.

The Kennedy’s moved back to their roots in Pawhuska shortly after their initiation into soccer and they brought the sport back with them.

Pawhuska wasn’t and isn’t known for soccer; in fact it is thought that Faith Kennedy is the first Pawhuskan to get a college soccer scholarship.

When the Kennedy’s returned to Osage County they joined a closed soccer league in nearby Bartlesville.

Terry Kennedy coached the one Pawhuska team in the league, the Pawhuska Huskies, which started dominating the Bartlesville league.

Naturally, Faith developed a love for soccer at an early age but it wasn’t until she was about 12 years old that she considered it for her future.

Terry Kennedy knew it was time for the girls, especially Faith, to play competitive.

“In Bartlesville there was nobody there that could beat us,” he said. “Every one of the girls we had on the team, we had a bunch of Osage Girls, they were really, really good, our girls were really good and I wanted to keep them together as a team.”

So he moved Faith and the rest of the team to a league in Tulsa.

It was a big move for the team and for Faith as she was the team’s star player.

“When I turned 12 the opportunity for competitive soccer came up instead of just playing recreationally the whole time,” Faith said. “When I got to play competitive I realized I really liked it and I wanted to do that.”

Terry Kennedy spent the last couple of years commuting Faith and the rest of the team to Tulsa and back, and out of state for team practices, games, leagues and tournaments.

Being the only parent to do so became very expensive but he knew it would help Faith and the girls on the team in the long run.

“I wanted her to be challenged, I didn’t want her to be the diva on the team, I wanted her to learn how to play,” he said. “It’s finally paid off, we spent so many years and so much money…we’ve gone as far as Florida, we’re getting ready to go to Las Vegas and we go to Little Rock, Ark., about three times a year.”

It was because of all that traveling and exposure that Faith started getting glances from various colleges.

But one particular coach was from Northwestern Oklahoma State University.

One day he and a couple of soccer players showed up at a game to watch Faith play.

Faith said she had her heart set on the school for a number of reasons but the academic factor stood out the most.

“Northwestern I heard has a really good education program and a bunch of people that I’ve talked to who have degrees talk about how great it is,” Faith said. “When I heard that Northwestern was really good in that direction, which is where I want to be, it clarified things even more.”

Faith said she wanted to make sure she started at a place she would get good playing time and she plans to transfer to Oklahoma State University after her sophomore year.

Faith is also a high school track star in medleys and the 100-meter dash. She’s qualified for the state meet the last four seasons, made it to the preliminaries her freshman year and medaled every year since.

But soccer has her heart.

She knows how big of a deal it is to play college soccer but she’ll remain grounded by the little things that remind her of why she started playing in the first place.

“Just to be able to play in college, having people looking at you and wanting you to play there is a huge opportunity,” she said. “The team, and winning and losing as a team, the feeling of doing something good for team, that makes me feel good.”