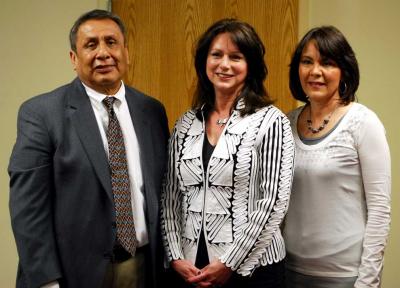 ON Election Board confirmed by Congress

The Second Osage Nation Congress confirmed three Osages who will sit on the Election Board, as well as one alternate board member during the April 13 Hun-Kah Session.

Walter Hopper, Shannon Lockett and Terry Hazen were unanimously confirmed for the board, as was Suzanne Moore who will be an alternate board member.

Hopper (of Tulsa) and Lockett (of Fairfax) were appointed last year as part of the Nation’s first Election Board, which oversaw the Nation’s 2010 elections for the Executive and Legislative branch positions open to the highest vote getters. Former board member Joe Conner was not reappointed by Principal Chief John Red Eagle’s office.

Hazen (of Fairfax) has work experience in the social services field as a child welfare worker and joins the board, which will oversee the 2012 election. Six Congressional seats are up for grabs in the election.

The Election Board will be in charge of election activities including: ordering the ballot machines and paper ballots; handling the candidates’ filing paperwork and fees; conducting background checks on the candidates to confirm eligibility for holding office; and enforcing other laws and policies in the Nation’s election code.

A revised Election Code remains tabled in the Congressional Committee on Government Operations pending Attorney General feedback on the bill as requested by the committee.

Congressman Raymond Red Corn introduced the revised Election Code (ONCA 11-40) during the Hun-Kah Session, which is “An Act to govern the conduct of Osage Nation elections, including elections for Principal Chief, Assistant Principal Chief, Congress, elections for the retentions of Judges of the Osage Judiciary, and other elections required by the Constitution and by law.”

This revised Election Code includes a requirement for the chief and assistant chief to run on a single ticket as well as revised timelines for elections, primary elections and special elections. According to the bill, “the joint filing of two candidates, one for each Executive position, shall comprise a ticket for the election.”

Red Corn said he supports the single ticket idea for chief and assistant chief to avoid having conflicts between the two elected Executive Branch officials.

ONCA 11-40 was taken up during the March 31 government operations committee meeting where a motion was made to table the bill pending an opinion from the Attorney General’s office on whether the proposed bill conflicts with the Constitution. The committee did not revisit the bill before the Hun-Kah Sesssion concluded April 15.