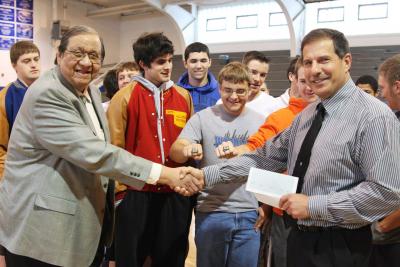 Football games come and go and so do the memories that come with them.

But with the help of a $5,000 check from the Osage Nation the Woodland football team will always remember that cold December night when they won the Class A state championship title.

On March 31, Osage Nation Principal Chief John Red Eagle presented the check to Woodland schools for the purchase of rings to commemorate the team’s win.

Red Eagle said he personally kept up with the team throughout the season and was happy to help celebrate their victory on a personal and professional level.

“To achieve something that they’ve achieved it takes a lot work, a lot of effort, a lot of dedication,” Red Eagle said. “We’re just proud that there was Osage children there, there were Indian children on the team and part of this community, this area to win a state championship.”

Five of the known Osages on the team were Ben Good Eagle, Willie Zachery, Mark Grigg, and brothers Cole Brumley and Lane Brumley.

Woodland football coach Joe Sindelar said he knew how much the rings meant to his players and was happy to hear about the donation.

He said every community has a couple of kids who can’t always find the funds to pay for their rings and Woodland had a couple of their own.

“This is a kid that couldn’t afford a ring, who couldn’t get it without this donation really, and when he saw this it literately, it’s almost like it took his breath away, literally he was just like ‘oh my god, that’s what they look like?” Sindelar said. “You just can’t describe what that’s like when you’re dealing with a kid that just wouldn’t have been able to have something like that.”

About 40 people total have been given rings on behalf of donations and other funds from the program.

Sindelar said the estimated cost of the rings was about $12,000. The 40 rings went out to 31 players, coaches and managers. A handful of outsiders also purchased their own rings.

For some, especially freshman brothers Cole Brumley and Lane Brumley, being a part of a winning team is something they used to just talk about.

“It feels good to have a ring as a freshman,” Lane Brumley said.

His brother Cole added, “It probably won’t happen for quite a while.”

Some thought it wouldn’t happen at all, considering the way the season started.

Sindelar, a principal in the Woodland district for the last five years, had a history as a coach and assistant coach for a total of 23 years and decided he could jump in and help.

“These guys (the players) knew of my history and knew of my background but they had to believe and had to buy into what I was doing,” Sindelar said.

But for some it wasn’t that easy.

Woodland junior running back and defensive end Willie Zackery said he had his doubts but a couple games into the season a state championship seemed possible.

From that point on it was history. The team continued to win and they started to believe. Sindelar said it was a true Cinderella story that will always be remembered with the rings.

“That’s their memory forever, they have it forever, and that’s why it’s so important for us to have gotten these rings and made sure that every kid got one,” he said. “A lot of appreciation, the chief didn’t get to see the thrill that I got to see but I hope he will understand how much I appreciate getting to see kids get these rings – because of that donation, it wouldn’t have been complete without it.”