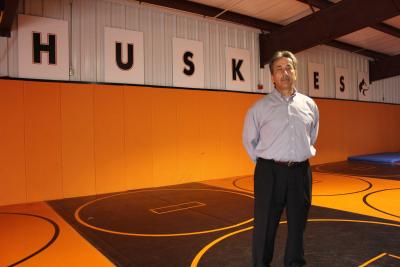 Since 1996 the back of every student athlete’s “P Award” has a note written by Martin Parks.

Some are short sentences of inspiration, others are kind words of encouragement, but all are personally addressed to every student athlete.

“On the back I tell them how much I appreciate them, and some of their strengths and things like that individually, and I still do that to this day,” Parks confessed. “I still have individuals who are grown now with their own children, I’ve already hit my second generation . . . I’ve had people show up over Christmas break, spring or summer time and say, ‘you remember writing this?’”

After 31 years Parks remembers writing all the messages and has decided to say goodbye and retire from Pawhuska School District.

As a coach, athletic director, teacher and assistant principal, Parks has seen a great deal of changes in the education atmosphere.

“When I first started teaching we only had one computer in the junior high and it was as big as a desk, we had all chalk boards, there wasn’t such a thing as a cell phone,” he said. “Life was a little bit different and kids then still said ‘yes sir,’ ‘no sir,’ now they go ‘what?’ or ‘hey dude.’”

The Osage, Cherokee and Shawnee coach has spent most of his life in Pawhuska.

He was an average high school athlete at Pawhuska High School and entered the military from 1971 to 1973 as a medic with the 25th Infantry Division. He attended Oklahoma Baptist University in Shawnee and after graduation returned to Pawhuska to work for the federal government.

He started the first-ever Pawhuska elementary wrestling program in 1978. While in the military his commanding officer had him and the others wrestle for conditioning purposes and Parks latched on to the sport ever since then.

“I jumped into that and it got me more interested in it,” he said. “When I came back here I just saw there was a need for some of our young people to get involved in some extra things, so I started that elementary program. We had so much success with that and the (junior high) school called me and said, ‘don’t you have an education degree?’ And I said, ‘yes.’”

He started working in Pawhuska Public Schools in 1981. He was a junior high football and wrestling coach for 16 years with only one losing season.

From 1984 to 1986 he decided to enter the master’s program for a degree in curriculum and instruction at Oklahoma State University.

In 1996 he started coaching high school wrestling and in 2005 he moved from the junior high to Pawhuska High School and became the assistant principal.

For about six years Parks dealt with a lot of negativity that comes with the assistant principal job and has decided it’s time to call it quits.

“Emotionally it just kind of wore me out,” he said. “I try to take a sincere approach to all students and all athletes, and not just care about them because they’re wrestlers or football players.”

Pawhuska High School Principal Rod Pitts said Parks’ sincerity is what made him good at his job.

Pitts has known Parks for 27 years. He said as an assistant principal Parks has had to make tough disciplinary decisions but his presence will be missed.

“He does a great job and he cares about every kid in the building, and he cares about their progression through life. It’s more than just academics with him, it is an absolute life path with him and the kids, and he does a tremendous job with that,” Pitts said. “He’s very trusted and I think trust is a hard thing to obtain with high school kids, and he’s done a good job of obtaining that trust.”

As the head wrestling coach Parks has three state runner-up trophies, dozens of state- qualifying wrestlers, a state championship as an assistant coach and was inducted into the National Wrestling Hall of Fame in 2003.

A modest man, Parks often forgets the impact he’s made on students and thinks more about the impact they’ve made on him.

A particular instance he recalls was a couple years ago when a wrestler named Will Chambers died from bone disease.

Chambers was on the wrestling team and often struggled with his disease on the mat. During a district meet the team needed Chambers to pull a win to get the entire team into the state championships. With 18 seconds left on the clock and pain in his eyes, Chambers pulled out a pin and gave his team a memorable win.

Chambers died a few months after and left Parks with a lesson he’ll never forget.

“A lot of kids when they hit that wall just want to give up, they don’t want to fight through things today . . . throughout the years I can name a hundred or more that have shown me how to fight through things in my own life even, so I watched them, what they can do and it gives me strength too,” Parks said. “Some of the best things I’ve learned, I’ve learned from my athletes themselves . . . I’ve learned that they bring their own set of problems and they’re able to overcome them. And sometimes whenever I feel sorry for myself I think of what some of them have done.”

About a year ago Parks started a trophy business with his wife LaCrecia called Trophies and Plaques Unlimited. They run the business out of their two-car garage turned office. After retirement he plans to spend more time running the business.

He also has three children and five grandchildren he hopes to spend more time with.

Parks said in his 58 years on this planet it’s the hundreds of young students he’ll miss the most.