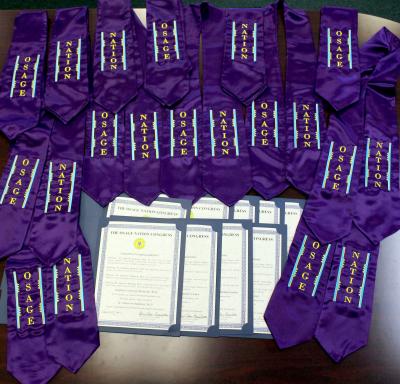 In the words of Osage Congressman William “Kugee” Supernaw in his email newsletter, “GOOD GOLLY GRANNY!! IT’S ANOTHER GAG ORDER.”

A communication directive was emailed to the Nation’s directors April 25 by Senior Executive Advisor Faren Anderson that said, “all directives and requests from Congress members regarding departments be directed to Raymond Lasley, Executive Advisor of Programs, for assistance.”

As a director, who wished to remain anonymous, put it, “That’s a gag order.”

The directive, only three paragraphs long, is not nearly as detailed as the 3-page Gray administration’s “Executive Branch Protocol and Procedures for Working with and Communicating to the Osage Nation Congress.” Gray’s communication protocol was issued in 2009 and was so vastly unpopular that every candidate that ran for principal chief in the 2010 elections condemned the protocol, including Chief John Red Eagle.

“It’s sad that I can see that after seven months we’re turning and going in different directions,” said Speaker of the Congress Jerri Jean Branstetter. “Everyone campaigned on openness and accountability and it’s sad when individuals can’t talk to tribal members.”

The Chief’s Office declined to comment for this story.

In the Red Eagle directive, all questions from Congress to the employees are to be sent to Lasley and if he is out of the office then the questions are to be referred to Anderson or Chris White, executive director of governmental affairs for the Nation. According to the directive, this communication protocol has been in practice and is being used by directors already.

“Several Congress members have contacted Mr. Lasley to schedule an appointment to meet and discuss such ideas and concerns,” according to the directive. “This type of communication has resulted in a more positive and efficient situation and has produced great results.”

Branstetter doesn’t know of any requests Congress made to employees that has been answered by Lasley in coordination with the new communication directive, but she said Chief Red Eagle told her the directive stemmed from Congresswoman Shannon Edwards and the Education Department. Branstetter asked Red Eagle if he knew why Edwards was sending inquiries to the education department and he said ‘no.’

Branstetter forwarded the Osage News an e-mail correspondence dated April 26 and April 27 between Edwards and Anderson.

Edwards, who started an awards program for Osage college graduates who received help from the Nation through the Higher Education Scholarship, are to receive a sash to wear at their graduation ceremonies and a commendation from the Congress. According to the email, Edwards asked the Education Department repeatedly to put an announcement about the awards program on their Web site on the Nation’s homepage. Each time she inquired she was told that they were waiting on approval from the Chief’s Office.

Edwards emailed Anderson to ask her if she could approve the announcement so the education department could post the information. Anderson emailed her back and said the awards program is a Congressional awards program and didn’t see a role for the education department. Anderson said, “If the Congress would like the Executive Department to consider offering a program such as this, then Congress may choose to submit their program ideas to Raymond Lasley, Executive Advisor of Programs, and he will work together with the department to coordinate such ideas.”

Edwards said she couldn’t believe Anderson would deny a request to let the education department post information that is meant to solely benefit students. To date Congress has given out 19 commendations.

“As you know, this is an inexpensive project the [Congressional] Education Commitee has asked the Education Department to oversee for over four years with no buy-in from “Executive,” Edwards wrote. “It was presented yet again this fall with both you and Mr. Lasley present with no response. I believe the effort by Congress was not to start a turf war but to assist the Department in getting the project off the ground.”

The First Osage Nation Congress criticized the Gray administration for its “communication protocol,” prompting then-Congressman Doug Revard to stand up at an all employee meeting in April of 2009 and liken Gray to Adolph Hitler. Revard is now an Osage Gaming Commissioner.

As a result of the Gray administration’s protocol, a law that gives Osage employees due process if fired for violating such policies was passed. Titled “Speak What’s on Your Mind Act,” the law gives Osage Nation courts jurisdiction over employment actions involving freedom of speech and freedom of association after administrative remedies are exhausted.

The law states: “no policy or practice of the Osage Nation government shall take away the right of employees to express their personal opinions when asked a question by a representative of an administrative body or the right to express their political opinion when not acting in an official capacity.”

In 2009, Gray said the communication protocol was a standard practice of governments everywhere and just reinforced a chain of command that was essential for accurate information on the Nation’s programs when the Osage Congress had questions. Nearly every candidate that ran for the office of principal chief in the 2010 elections said they were opposed to the communication protocol, and if elected would drop it.

Principal Chief John Red Eagle said on his inauguration day last year that he would be dropping Gray’s “gag order,” which was received by applause and cheers from the crowd.

In Red Eagle’s first months of office a communication directive was issued to all the directors that said all employees are to ask permission before speaking with the media and all questions from the media are to be directed to the Chief’s Office.

Currently there are approximately 30 directors over the 400-plus employees working in the Executive Branch.

A copy of the emailed communication directive to directors:

Chief Red Eagle has asked that all directives and requests from Congress members regarding departments be directed to Raymond Lasley, Executive Advisor of Programs, for assistance. He has been designated as the Executive point of contact to address Legislative requests regarding departments. Mr. Lasley will assist Congress members in finding answers, solutions or acquiring information as requested through him. He will work with the Executive Office members and the program directors to acquire requested information.

Any Congressional ideas for departments should be also be addressed through Mr. Lasley, as Chief Red Eagle has requested Mr. Lasley provide his assistance with such requests. Several Congress members have contacted Mr. Lasley to schedule an appointment to meet and discuss such ideas and concerns. This type of communication has resulted in a more positive and efficient situation and has produced great results.

If Mr. Lasley is unavailable, Chief Red Eagle has designated Chris White and me to assist with Legislative requests. All requests made to the three named individuals will receive priority assistance.