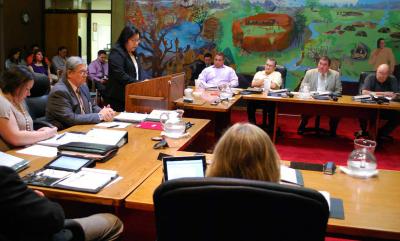 ON Congress issues 11 subpoenas to Treasurer and accounting workers

The Second Osage Nation Congress voted unanimously to issue subpoenas to Treasurer William Kemble and 10 other government workers who handle the Nation’s accounting affairs during its brief Ninth Special Session July 5. A total of 12 individuals will appear before a Congressional committee next week.

The subpoenas mandate 11 individuals to appear before the Congressional Committee on Government Operations to provide testimony and to produce specific documents and records to the Congress beforehand. Another ON government worker has been invited to attend, bringing the total to 12.

According to copies of the subpoenas, the 11 people must submit copies of various documents to the Congress prior to the Government Operations Committee meetings set for July 14 and July 15.

The requested documents include: letters and audits from an independent auditing firm which previously audited the Nation’s accounting affairs; copies of banking transfers and bank statements; and copies of policies/ procedures currently used by the Treasury/ Accounting offices.

Congressman Raymond Red Corn, who motioned for Speaker Jerri Jean Branstetter to issue the subpoenas, stated the subpoenas were being sought to investigate tips Congress received from “multiple sources” about potential problems with the Nation’s accounting practices.

“The Speaker and I were made aware through multiple sources of potential problems in the accounting department,” said Red Corn who is also Second Speaker for Congress. “Generally speaking, the problems have to do with collateralization, transfers of monies from accounts in rather inexplicable ways and possible relaxation of controls, which are fundamental to most accounting practices. These concerns illustrated some possible exposure for the Nation to loss of assets under certain conditions.”

“We felt it was appropriate to ask the Congress to come in and issue these subpoenas so we can find out and verify whether or not there are problems in the accounting department,” Red Corn said. The Ninth Special Session was called after a majority of the Congress signed a legislative proclamation for the session.

Congress has the power to call itself into a Special Session (via legislative proclamation) if two-thirds of the Congress members sign a written request calling for the session, according to the ON Constitution. Special Sessions are limited to 10 days each, but can be shortened if a Congressional vote calls for early adjournment. The Ninth Special Session lasted just under 15 minutes before adjournment.

In her legislative address during the July 5 session, Branstetter noted: “As a fiduciary duty of this Congress, we are bound and responsible to ensure the laws and Constitution of the Nation are followed. It is not the intent of this Congress to cause harassment or harm, but to seek truthful and honest actions for this Nation and that they are being followed by all.”

After Branstetter’s comments, Red Corn made a motion for “the Speaker to issue subpoenas to the following Osage Nation employees to appear before a committee of Congress to give testimony, produce documents, as determined by the Speaker, regarding Treasury and accounting practices.”

Those testifying individuals will meet with the Government Operations committee, which has scheduled meetings for July 14 starting at 9 a.m. and 1 p.m. and July 15 at 9 a.m. and 12:30 p.m.

Another worker, identified as Tammy Moxley, is also listed on the meeting agenda. Moxley did not receive a subpoena, but was invited by Congress to attend the meeting, Branstetter told the Osage News.

A 10th Special Session of the Congress has also been called to start July 14, which coincides with the Government Operation Committee meetings.

Congresswoman Shannon Edwards asked Red Corn if efforts had previously been made to address the issues surrounding the accounting practices before the subpoenas were requested. He responded with a “yes.”

“I’m going to vote in favor of this,” Congressman Geoffrey Standing Bear said before the vote, “because it’s my information that we need to clear up the problem we have talked about already, but my information was that some of our minerals funds from the Minerals Council was involved and I don’t know if that’s true – but that’s what I was told and that needs to be cleared up.”

The Congress voted 12-0 to have Branstetter issue the 11 subpoenas.

After the session, Kemble told the Osage News his office was not aware of information requests to his office from Congress prior to the subpoena vote.

In a July 9 statement, Kemble said: "Even though Treasury is not aware of any information requests from our Congress and offered to provide our Congress information without use of a subpoena prior to the Subpoena-voting date, Treasury is looking forward to this opportunity to provide information that should resolve their concerns.  Treasury also continues to find more efficient and effective means and formats to provide accurate financial information of the Osage Nation to the great Osage people."

Red Corn said the Congressional Affairs Committee (which he is chairman of) met before the July 5 session and voted to appropriate money “to hire an outside (certified accounting) firm to review documents that are collected via subpoena” and that firm will assist the Congress in evaluation of the records and testimony.