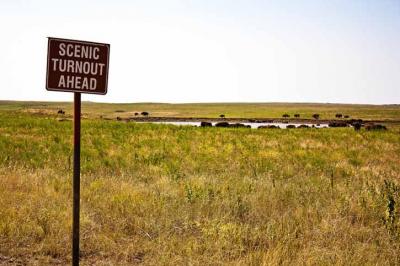 Wind farm permit to be considered Thursday amid Osage concerns

Joe and Carol Conner describe the Tallgrass Prairie Preserve north of Pawhuska as one of the most pristine spots in the world.

During a sunny day’s drive on the Preserve’s unpaved road, the Conners take in the sunlight, grassy hilltop views and watch small buffalo herds walk across the grassland which hasn’t been developed or farmed on. “If this is not pristine, I don’t know what is,” Joe Conner (Osage) said.

The scenic views of the prairie looking west from Pawhuska could be altered if a Missouri-based wind farm maker is allowed to build 90-plus wind turbines on private ranch lands. The Conners are also concerned the wind farm could disrupt cultural sites and injure property values on the prairie, if it’s built.

The Osage County Board of Adjustments is considering a permit filed by Wind Capital Group of St. Louis to build the wind farm. A public meeting on the company’s permit is scheduled for Thursday Aug. 11 at 6 p.m. at the Osage County Fairgrounds.

In a mass email, Joe Conner, of Fairfax, said he opposes the wind farm development because property values could decrease. He also said construction of the wind turbines may also disrupt any unmarked graves of Osages who lived in the late 19th or 20th century.

Carol Conner said the wind farm would be a nuisance because “all of us will get to see and hear (the wind turbines).” Joe Conner adds: “Property values will drop because no one wants to look at them.”

Joe Conner complained to Principal Chief John Red Eagle about the wind farm project and said he was pleased when Chief Red Eagle announced his opposition to the project in June.

“Although the (Osage) Nation is not opposed to alternative energy development, large wind farms are not conducive to the Nation’s overall economic initiatives and environment,” Chief Red Eagle said in a statement. “Therefore, I believe taking this position is necessary for the greater good of the interests of our tribal citizens and the Osage Reservation area.”

Chief Red Eagle also said: “Primary in this opposition is the Osage Minerals Council. The Council, charged by the Osage people to administer and develop the Osage Mineral Estate in accordance with federal law, has provided my office with a letter of opposition to the development of industrial wind farms that could adversely impact minerals development.”

According to pamphlets issued by Wind Capital Group, the proposed wind farm has 94 wind turbines which would be built on 8,500 acres east of Burbank. The company states the wind farm will also have “a non-contiguous footprint of less than 120 acres.” The facility will be named Osage County Wind and will provide generated electricity to a Missouri co-op.

The company touts its project as one that “is expected to provide over $30 million in property tax revenues to Osage County, long-term lease payments to local landowners, and $1.5 million in regional business activity during construction.  Additionally, the project will create 250 critical on-site construction jobs and 12-15 permanent positions during operation,” according to its Web site.

In its brochure, Wind Capital Group states “a full archeological survey will be completed on proposed areas of disturbance before construction activities commence.”

The status of that survey and other environmental assessments are unknown. An Osage News request for comment has been left with two representatives of Wind Capital Group before this story was posted online. It’s unknown if the company plans on working with the Osage Nation and Osage Minerals Council to address any concerns with regard to the land’s historical significance as well as subsurface minerals.

Chris White, executive director for governmental affairs for Chief Red Eagle’s office, said: “We will, at the appropriate time, inform our constituents and neighbors of our actions to prevent these foreign owned companies from dictating what they do here in our homeland… all options available to the tribe are on the table."

"The Osage Nation will not debate the pros and cons of these industrial wind farms in the media, but will continue to oppose them being located here in Osage County."

“We are working at the proper levels to protect the tribe's property rights and to avoid any damage to the ecosystem of the land,” White said. “Maintaining the sanctity of our land far outweighs any financial reward.”

The Osage County Fairgrounds are south of Pawhuska on Skyline Drive west of State Highway 99.