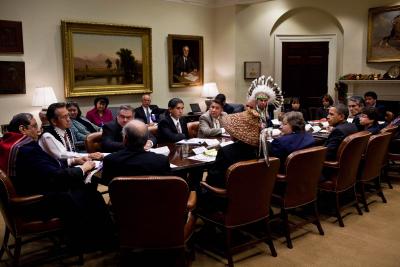 In December 2010, President Barack Obama met with 12 tribal leaders in the Roosevelt Room of the White House. Chief Red Eagle was among those selected for the Dec. 15 meeting – one day before the annual Tribal Nations Conference started.

A photo of this meeting was shot, featuring Chief Red Eagle sitting at the left end of the table wearing his blue and red broadcloth blanket. He gave the opening prayer before the meeting started.

To view the photo and Web site, go online to: www.whitehouse.gov/nativeamericans