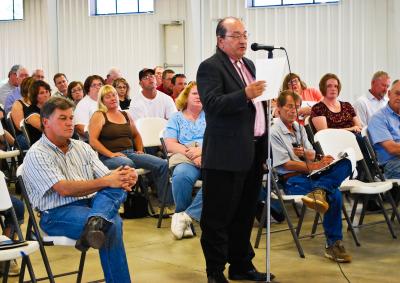 The Osage County Board of Adjustment unanimously voted in favor for a Missouri-based wind farm company to build 94 wind turbines in western Osage County near Burbank. Construction on the project could start this fall and would be finished in about one year.

Amid concerns shared by an Osage Nation official and discussion surrounding the communication between St. Louis-based Wind Capital Group and the Nation, the board voted 4-0 to approve a zoning variance for the land originally designated for agricultural use.

Therefore, the decision gives the OK for the wind farm construction on those lands. When completed, the wind turbines are estimated to stand at least 400 feet tall.

On Aug. 11, the board heard public comment from both supporting and opposing parties of the wind farm during a public hearing at the Osage County Fairgrounds. Several local residents, including the Shidler Schools Superintendent, voiced their support for the wind farm, but Osage Nation government officials, including the Minerals Council remain opposed to the project.

Chris White, executive director of governmental affairs for Principal Chief Red Eagle’s office, spoke at the meeting with an attendance of approximately 100.

“It is the position of the Osage Nation that no wind farms be developed within Osage County, we ask one more time that this be honored” said White. “There is a continuing federal trust responsibility to all Native tribes by the United States. This responsibility is upheld by the U.S. Constitution, treaties, Supreme Court decisions, executive orders, federal statutes, regulations, existing federal policies, tribal laws and the dynamic political relationship between the Osage Nation and the federal government.”

Chief Red Eagle has voiced opposition to the project, which includes disruption to the environment, habitat for area animal species and concerns for the Osage Minerals Estate. Other recent concerns aired include possible disruption to historical and unmarked gravesites, lower property values and sound/ sight nuisances brought by the wind turbines.

“The Osage Nation vows to protect the Osage Minerals Estate and the Tallgrass Prairie under which it lies. If our requests continue to be ignored, then the Osage Nation will be left with no choice but to utilize every option available to us, including a vigorous court defense of our rights and our natural resources,” White said in conclusion.

Tom Green, senior manager of project development for Wind Capital Group, told the Osage News (prior to the meeting) he approached Osage Nation officials months ago. He would not elaborate on what took place in those discussions, but described them as “polite and professional conversation” and similar recollections were reiterated during the public meeting.

“We met with the Minerals Council, discussed the project, we’ve had very, very cordial, courteous, professional conversations with the tribe and very frank discussions from both points of view,” Green said at the meeting. “We have full respect for the tribe, but we disagree on this,”

“That was a very honest statement,” White told the board in response to Green. “Tom seems like a good ol’ boy, we’ve had lunch together one time – I paid for mine, he paid for his – and the ultimate statement was that we disagree… I might only add that there is federal regulation, Osage County Commission has been apprised of such that federal regulations, there’s federal law, which supersedes state laws, supersedes your county ordinance, local laws.”

“The Board’s decision to approve the permit was not surprising. We have been disappointed in the County officials’ lack of cooperation in this entire process,” Chief Red Eagle said. “We’ve reached out to the Commissioners on more than one occasion concerning this issue and how the two governments might work together on alternatives to these industrial wind farm developments… in each instance, the Commissioners have failed to respond. This has left us no choice but to proceed with legal action in this matter.”

At its Aug. 12 scheduled meeting, the OMC also commented on the county’s decision. “It wasn’t a surprise,” said OMC Chairman Galen Crum.

During the meeting, Crum also stated “when we did meet with (the wind farm officials), they were prepared to offer us nothing for the Minerals Estate,” adding that the cost of moving a wind turbine location (should it be located on an oil well) would fall on the Minerals Council.

Councilwoman Cynthia Boone said she planned to introduce a resolution at the next OMC meeting (Aug. 17) to contact the council’s attorney to proceed with legal action “if necessary to protect the shareholders.”

Joe Conner (Osage) also spoke at the OMC meeting and applauded the resolution plan. His family’s original allotment lands are in northwestern Osage County close to the proposed wind farm land. “I consider that sacred land from our ancient Wah-Zha-Zhi culture."

Amid the oil pumpjack which dots the landscape, Conner said: “It’s nothing compared to a 400-foot wind turbine.”