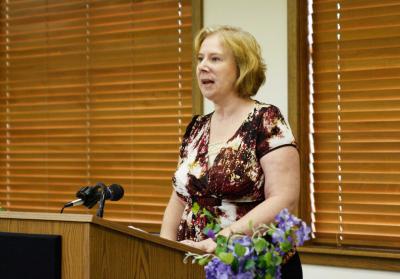 Nation working to provide housing for victims of domestic violence

It is one thing to escape a domestic violence relationship but it’s another to stay out.

That’s why the Osage Nation Counseling Center is looking to provide homes for victims and survivors of domestic violence in Osage County.

“We’re going to try to enlarge our services to take that extra step and that is provide housing for Native American women who are trying to get out of bad situations,” said Louis Gray, the Interim Director of the Osage Nation Counseling Center. “Part of what the state’s doing also is helping those women, once they get out to become financially ready, get on their feet in a way that they don’t go back and get in that cycle of domestic violence.”

On Aug. 23 the Osage Nation Counseling Center held a luncheon and presentation titled “Stepping Out of Domestic Violence” at the Dave Landrum Community Center.

Various tribal entities were invited to the event including the Osage Nation Chief of Police.

Guest speakers from the Oklahoma Coalition Against Violence and Sexual Assault presented at the event including OCAVSA Prevention Coordinator and domestic violence survivor Shelly Collins.

Collins said her former husband shot her five times and left her for dead, after abusing her for several years.

She said one of the hardest things about bouncing back from domestic violence is the mental aspect. She said the new initiatives set to help victims and survivors get back on their feet only helps their ability to heal mentally.

“The biggest thing for victims is getting their self-esteem built back up because they’ve been torn down so far,” she said. “So having this community support and the support from friends, family or whoever is there, who can support them is so important.”

Collins and her colleague Jo Descher, Oklahoma Coalition Against Domestic Violence and Sexual Assault Transitional Housing Director, said that most women tend to return back to their abusers for housing and economic reasons.

Descher said once a person with children becomes homeless the person’s children are automatically taken away due to neglect. In fear of losing their children and having no money most women return to their abusers, Descher added.

Because of such incidents programs like the Transitional Housing Program in Oklahoma are important.

The program helps survivors of domestic violence get back on their feet with housing and economic aid. The Program is funded by the Transitional Housing Grant Program and in partnership with The U.S. Department of Justice and Office on Violence Against Women (OVW).

Gray said he and others at the counseling center are working on getting their own housing and economic program for Native American and all women in Osage County.

Gray said the tribe has funds available to help women get on their feet. He said there is a grant where the counseling center can lease homes in the community to women who are trying to get their lives back on track. He said now it’s time for the next step.

“We’re at really early planning stages of all that but we’re going to try and get it going…So we’re trying to build a whole series of homes where women can get out of that cycle of violence,” Gray said. “It’s such a big problem, we got to do something, it affects families and marriages, schools, social problems all the way down the line. We’ve got to do something.

“They’re (women) the most powerless of all the social classes that we have and we have to do our part,” Gray added.

So far the counseling center offers counseling sessions and helps women get protective orders. He said the services are open to all women in the community.

The counseling center will host another presentation on Oct. 7 from 11:30 a.m. to 1 p.m. at the Landrum Community Center in Pawhuska.

Former Miss Oklahoma and author Susan Supernaw, who is also a domestic violence survivor, will present and talk about her book, “Muscogee Daughter.”