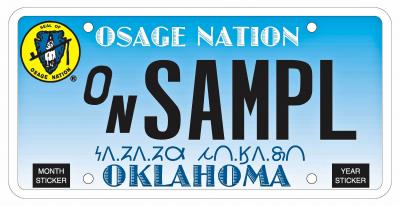 The Osage Nation license plate is getting a brush-up and will bear the Osage language starting in October.

The landscape artwork on the Osage tribal tag’s bottom half will disappear to make room for the orthography symbols.

The Osage Tax Commission, which sells the license tags to Osage citizens, voted on the new design Aug. 9. The commission considered four design samples featuring the Osage orthography before deciding on a design which has “Osage People” written across the bottom center. The new tag’s colors will remain blue and white and bear the Nation’s yellow seal.

Osage Nation Language Department workers Rebekah HorseChief and Braxton Red Eagle approached the Tax Commission with the idea to include the orthography on the tag this summer, which spurred the design change. Red Eagle said he is “optimistic” about the new tag because it’s another way to raise awareness of the Osage language.

“People from all over the country are going to see these tags,” said Red Eagle, a University of Oklahoma student who was a summer intern for the department. “This is the biggest way to spread it, I would say. All my friends are going to ask me about it.”

Red Eagle, a psychology major at OU, and HorseChief brainstormed on work ideas for the summer when he started his internship, which led to designing a new tag with the orthography.

On the new tag design, the orthography reads “Osage People” and is pronounced: “Wah-Zha-Zhi Ni-Kah-She.”

“It’s an assertion of our sovereignty through our language, which identifies us as Osages,” said HorseChief, who is a language instructor and student recruiter for the department. The Language Department has a history of working with other Nation entities in using the orthography to promote awareness of the language.

On Aug. 9, the Tax Commission selected a tag design with a unanimous vote after discussion and feedback on the designs. They praised the chosen design’s simplicity.

“I like it,” said Tax Commission member Milton Labadie. “If we give people too much to look at, then we’ll have to be concerned about law enforcement.” Special license plate designs in other states have drawn criticism from authorities that have trouble reading tags with several colors and designs while on highway patrol duty.

Tax Commission member Richard Luttrell Sr. said he also liked the chosen design, adding: “It’s simple.” He then made a motion to approve the Osage language’s addition to the tag and to remove the artwork featuring three teepees, three buffaloes and a horse rider.

This is the third design of the Osage tribal tag since 1997 when the white/ blue stripe tribal tag made its debut, said Tax Administrator Mary Mashunkashey. She said the Tax Commission office plans to make its first order of 400 new tribal tags in late September so they will be available for purchase in October.

The current tribal tag with the landscape artwork (featuring teepees, buffaloes and horse rider) is the design selected by the 31st Osage Tribal Council in 2006, Mashunkashey said.

Before the reformed government started, the Tribal Council hosted a poster contest to select a new tag design, which drew several entries. Barbara Alkire, a former government employee who is non-Osage, created the current and winning tag design, according to the Tax Commission.

With the newest tag design coming, Mashunkashey also believes more Osage language awareness will be shared as well as pride in Osage citizenship. “For a tribal member to be able to put a tribal tag on a vehicle shows they’re proud, they’re saying: ‘I’m Osage,’” she said.

The Tax Commission sells Osage tribal tags for motorcycles, commercial, farm; and recreational vehicles in addition to regular vehicles and those vehicles owned by military veterans.

The price of registering a vehicle with an Osage Nation tribal tag depends on the age and size of the vehicle. A brand new 2011 passenger vehicle with a factory price more than $15,000 costs $201 to register, Mashunkashey said. Personalized tribal tags have an additional $25 fee.

Osages interested in registering their vehicles with a tribal tag must provide the Tax Commission with documentation including proof of their Osage citizenship/ CDIB, vehicle insurance and proof of Oklahoma residency. The Tax Commission is online at www.osagetribe.com/tax and can be reached at (918) 287-5393.