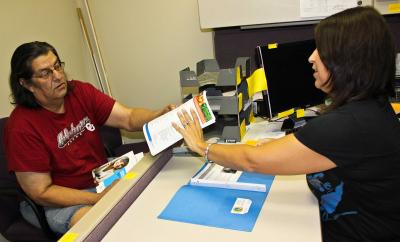 For most of his life Maynard Revard was a fairly healthy person who made few visits to the hospital.

But sometime in 1989 that changed, when Revard hopped into his truck and drove himself to Pawhuska IHS Clinic.

“I already knew I had it when I came in. My eyes were blurry, I was real thirsty and just didn’t feel well,” Revard said. “My blood sugar was way up there and they stuck me in the hospital.”

After spending about eight hours in the waiting room Revard was diagnosed with Type II diabetes and spent a week in the hospital.

Now the 63-year-old makes regular trips to Pawhuska IHS to take part in Diabetic Days, offered every Tuesday and Thursday by the Diabetic and Community Health Program at the clinic.

The program is open to all Native Americans who are registered at IHS and provides services like free blood pressure monitors, glucose monitoring supplies, assistance with dentures, eyeglasses, shoes and more.

Revard, Osage, said he was diagnosed with the disease when he was in his early 40s, and has made regular visits to the clinic since.

He said, unlike most, he doesn’t come from a long line of family with diabetes. In fact, just about no one in his family has the disease.

Because it was such an uncommon concept in his family Revard said he thought very little about the disease, and of the possibility of him getting it.

“I never thought much about it until I got it, and I didn’t know how it could impact your whole life,” he said.

Julie Mashunkashey-Miller, Pawhuska IHS diabetes nutritionist, said the program has been in full swing for many years but due to administrative issues it took a break for a couple of years. The program just started back up in July, thanks to a high demand from diabetic patients.

“Anytime, they can come in and ask questions, and we do our best to direct them so they’re on their way to a healthier lifestyle,” Miller said.

Marie Rumsey, registered nurse and Pawhuska IHS health programs director, said because the Diabetic Days program is a IHS grant funded program, all statistics on diabetes include all other Native American tribes.

However, she said the program does keep record of the participants in the program.

She said there are at least 442 active diabetic patients seen every three months at the clinic.

Ninety-five percent of those diagnosed had Type 2 diabetes, as apposed to Type 1.

While diabetes is known for its genetic transmittal it has no prejudices.

Revard’s case shows that even those who don’t have a history of diabetes in their family are just as vulnerable as those who do.

And while diabetes has no cure, some have proven that it can be prevented.

Paula Mashunkashey, Osage, comes from a long history of diabetes in her family. She’s watched family members young and old fall victim to the disease and eventually lose their lives.

“All my life I’ve lived with people with diabetes,” she said. “It’s a killer. It’s terrible. I’ve seen people die from it; my family members died from complications in diabetes, my youngest cousin died at the age of 37, he went blind, he had every kind of complication that you can imagine.”

Mashunkashey, 58, said at one point she watched her cousin as he went through routine dialysis. She recalls seeing “black looking stuff” being filtered out of his kidneys three times a week just so he could live. It was then, and a few other instances after, that made her take a good look at her life.

“I remember looking back at that 10 years ago, and I remember thinking it would be terrible to live like that and I think maybe that might have been the seed that really did it for me,” she said. “I got on the scale and I weighed 210 lbs and I started crying, and I said the next thing for me is going to be diabetes, and I just prayed to God, ‘Lord open up my eyes, tell me what I need to do.’”

Four years ago Mashunkashey started her journey to a healthier life to prevent being diagnosed with diabetes.

She enrolled in the Weight Watchers program, lost 50 lbs, changed her eating habits and exercised daily. She was determined to stop the diabetic trend in her family.

Yet some still think they don’t have a choice.

Miller said she meets plenty of parents with diabetes who often feel defeated before they even try.

“I’ve heard them say ‘I’m diabetic so my kids are going to be diabetic,’” Miller said. “But that’s not always the case, we want to start the prevention now, when they’re young.”

Revard said it took him a while to adapt to the changes he had to make once he was diagnosed. He said remembering to take his medications and eating healthy were the most challenging but he knew what would happen if he didn’t.

“If you don’t treat it you feel so bad, I don’t know how people could not treat it, you just feel horrible,” he said. “I knew people that were diabetic but they wouldn’t treat it, they just wouldn’t, they’d say ‘I’ll be alright,’ well they’re not here anymore or they got a leg taken off and now it’s too late. You’re looking to end your life 20-30 years early, that’s just not very smart.”

Diabetic Days are held at Pawhuska IHS Clinic Tuesday and Thursdays from 8 a.m. to 4:30 p.m. New patients can call the Osage Nation Diabetes Program at (918) 287-5525 to schedule an appointment.