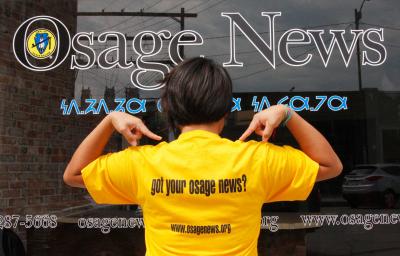 Beginning in October, the Osage News will be reduced to one newspaper per household.

“It is our goal to drive readers to our Osage News Web site, making it their primary source for information,” said Osage News Editor Shannon Shaw. “The news industry is changing to a more online, multi-media based information tool and we are changing with it.”

Currently, there are households that are receiving up to five newspapers, causing an unnecessary expense, Shaw said. Last year the Osage News cut its circulation by 1,500 by mailing it to members only and hoped to cut back even further by giving Osages the opportunity to cancel subscriptions or opt out altogether, but few took advantage.

Instead, the numbers grew with the growing number of members and the Osage News is still mailed to more than 10,000 Osages.

“By reducing the newspaper to one newspaper per household it will cut our distribution costs and save the Nation a little money,” Shaw said.

For those Osages that save extra copies of their newspapers for loved ones living far away, Shaw encourages them to contact the Osage News offices to update their family members addresses so they can continue to receive a newspaper.

An Osage News one-year subscription is $24.

For more information call (918) 287-5668 or email osagenews@osagetribe.org. The Osage News is also on facebook and Twitter, @OsageNews.