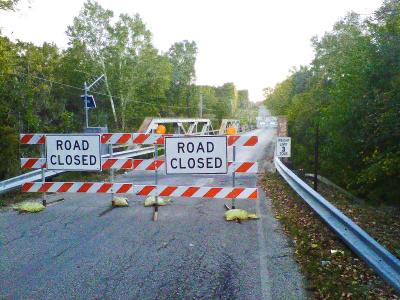 Road crews reopened the Bartlesville Osage Casino access off State Highway 123 after it closed earlier this year for construction improvements. The north-south county road access between the casino and U.S. 60 is now closed due for needed bridge repairs.

A one-mile section of County Road 2706 – commonly referred to as “39 Hill” – officially opened Oct. 11 after extensive improvements made by the Osage Nation Transportation Department and Osage County workers. The road was closed in early March for the improvement work.

“We removed the severe curves at the bottom of the hill,” ON Transportation Department Director, RJ Walker, said in a news release. “There’s a new shouldered road which is better than some major highways in the county.”

Construction crews along the roadway are still working on driveways, sodding and drainage, so it remains a construction zone with a speed limit of 25 miles per hour, according to the release. The three-way intersection where County Road 2145 meets 39 Hill is temporary and will be moved to the east, allowing thru traffic from the casino and 39 Hill.

While 39 Hill opened, the Oklahoma State Department of Transportation ordered the closure of the CR 2145/ Dave Ware Bridge over Sand Creek, which is south of U.S. 60. The bridge, built in the 1930s, is obsolete and a 190-day improvement project is ongoing, Walker said in the release.

“I want to thank our guests for their patience during this road project,” said General Manager Ressa Files of Osage Casino, Bartlesville. “The new road is much safer for travel and convenient for our guests and employees.”