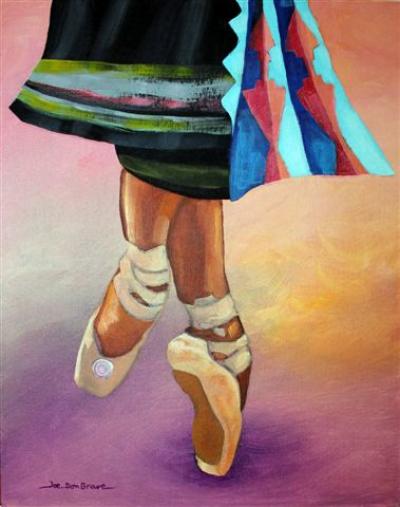 A new ballet is coming to town and it’s not, “The Nutcracker.”

A ballet, produced and created by local Osages, will be premiering in Pawhuska, Bartlesville and Tulsa titled, “Wahzhazhe,” which chronicles the Osage Nation’s history through dance.

The production reflects, “the rich culture of the Osage people who controlled a large part of what is now called the United States of America,” according to a prepared release.

The ballet is set to open in August 2012 with the support of the Allied Arts and Humanities Council of Bartlesville and various donors.

“Osages danced: before a hunt, before a raid, to express joy or grief, to prayer songs, to the beat of a drum – what better way to tell the Osage story than through dance?” said project sponsor, Kathryn Red Corn. Red Corn is also the director of the Osage Tribal Museum, the oldest tribally owned museum in the world.

“Osages have a great heritage of dance,” said Principal Chief John Red Eagle. “We are proud of our own Osage ballerinas, Maria and Marjorie Tallchief, who reached international acclaim in the twentieth century.”

Red Eagle added that this ballet, which details the history of the Osage people, “will provide an opportunity for Osage youth and adults to become involved in the creation of an artistic performance that honors their history and cultural traditions.”

The history, according to the release, details the Osages selling their Kansas Reservation in 1870 and purchasing their own reservation in Indian Territory in northeastern Oklahoma.

In 1906 the Osage roll was opened and closed with the government then dividing the reservation into individual allotments called “headrights,” according to the release. The unique agreement provided each Osage allottee with equal shares of a collective interest in the subsurface rights to the reservation. The rights to the Osage mineral estate remain in place and continue to financially bless the Osage People, according to the release.

In 2006 the Osage Nation was formed, giving the Osage People a three-branch form of government – allowing all Osages descended by the original 1906 roll a right to vote in their government, whether or not they owned a share of the Osage mineral estate.

The ballet production is being sponsored in part by Spyglass Energy Group, Michael L. Graves, and Nadel and Gussman, whose contributions total $50,000, according to the release.

“We are looking for additional tax-deductible donations from oil producers, which these sponsors have agreed to match up to $50, 000,” Smith said.

According to the release, an anonymous donor has offered to match dollar for dollar any Osage trust money donated to the ballet by Osage Shareholders. For more information about donating to the project, contact Randy Tinker Smith at (918) 704-4668.