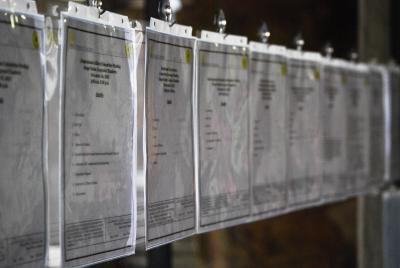 Several legislative items, including a budget to appropriate money for the 2012 higher education scholarships and the health benefit card, are at risk of not being considered because the Second Osage Nation Congress and Treasurer William Kemble are at odds over whether the Nation has an adequate amount of money to consider the appropriations in the Special Session.

On Nov. 9, the day before the 11th Special Session’s start, Kemble sent two letters to Speaker Branstetter regarding the Nation’s remaining funds for government operations and services to stay below the 2012 fiscal year threshold of $40 million, also referred to as the annual projected revenue amount. According to the Osage Constitution, Congress enacts laws to appropriate money for each of the three government branches but the annual budget cannot exceed the projected revenues.

For example, Kemble notes his to-date schedule of FY 2012 appropriations differs from the Congressional schedule recently sent to his office. His schedule includes two Congressional appropriations totaling $2.5 million for establishing a revolving Osage War Memorial Fund ($500,000 for ONCA 11-86) and a $2 million revolving fund to purchase restricted real property in Osage County (ONCA 11-67) to be spent with FY 2012 money. The Congress is challenging Kemble’s opinion because those two bills were appropriated with FY 2011 money and should not be spent with FY 2012 money.

The letters from Kemble were sent to the Congressional office on the afternoon of Nov. 9. The letters were then copied and issued to all Congress members and Congressman Geoffrey Standing Bear raised issue with the letters the next morning.

“Either the Treasurer is totally oblivious to what happened in committees on the floor or is just refusing to accept what we did – that’s my view,” Standing Bear said of Kemble’s letters. “Here’s the facts: We talked about this coming out of 2011 funds, the War Memorial at least, we put it in the Act, put it into law, we repeatedly said ‘this comes out of 2011 unexpended funds,’ we asked that it be signed by the Chief before the end of the fiscal year, which it was done, so where this comes from – I have no idea.”

Standing Bear then addressed Branstetter on a response to the letter. “This letter was addressed to you, so when you respond, can you please point out that the Treasurer has not read the law, doesn’t understand what’s going on and that makes me very nervous if this is the person in charge of our funds. My lack of confidence in the Treasurer is lower today than it was yesterday… I want to point out there was an extreme error made by the person in charge of our money.”

Congressman Raymond Red Corn also expressed concern over Kemble’s letters and that Kemble is not recognizing the approved appropriations. “It leads one to believe that the Treasurer thinks that he has veto power over appropriations bills issued by the Congress and passed by the Congress.” Red Corn also questioned whether Kemble’s letters reflect the position of the entire Executive Branch.

Branstetter said she believes the letter should have come from Chief Red Eagle and not Kemble. Red Eagle, who was at the Nov. 10 Special Session, was asked by Branstetter if he had any response to the Congressional concerns about Kemble’s letter. He said he did not.

In their most recent e-mail newsletters regarding Kemble’s letters, Red Corn and Congressman William “Kugee” Supernaw said Kemble’s letters were sent to the Congress before being reviewed by other Executive Branch officials.

Kemble’s revenue amount available differs from that of Congress

Congressional legal counsel Loyed “Trey” Gill addressed the letters during the Nov. 14 session in which he announced that he and Branstetter would have a meeting with Chief Red Eagle regarding the letters that afternoon. Gill noted Kemble’s opinion that the War Memorial and real estate purchase revolving funds were counted toward FY 2012 expenditures.

Gill also said Kemble’s letters appear to show a differing amount of money remaining for appropriations compared to numbers reported by Congressional staff budget analyst Jason Zaun. According to Congress, the Nation has $9.6 million in remaining tribal revenues to spend. According to Kemble, the Nation has $6.9 million remaining with the two revolving fund bills accounted in FY 2012 spending.

Gill said Kemble’s opinion creates “a large issue because the Executive Branch has proposed $10,088,834 this legislative session in appropriations, which leaves us $3,169,918 in the negative if the Treasurer’s calculations are used... obviously that would leave us no money to appropriate for the rest of the fiscal year.”

The 11th Special Session was called by the Executive Branch to consider 32 items, which makes “the proclamation the largest listing that Congress has ever received,” Branstetter said.

“The law requires the Treasurer to set the (annual) amount of the (Osage health benefit card program) each year on Oct. 1,” said Edwards who added the Legislative Branch has yet to receive the information from Kemble. “The Treasurer is the individual with the accounting information necessary to do that so as we stand right now, we have no amount set for our health benefit for the next calendar year (starting Jan. 1)… The Treasurer’s in violation of the law right now and I think that the citizens of our Nation rely on that benefit and we need to follow the law and get that in place.”

The Nation’s higher education scholarship program for 2012 classes is also in limbo. The Congress is considering a second bill to fund the scholarships after Chief Red Eagle pocket-vetoed an $8.9 million appropriation bill (ONCA 11-104) to establish a revolving fund for the scholarship funds shortly after the Tzi-Zho Session ended Oct. 6.

On Nov. 10, Branstetter sent a letter to Chief Red Eagle requesting that an email be sent to all scholarship students advising them that the Congress has yet to pass legislation to appropriate the scholarship funds.

The Congress meets at 10 a.m. for Day 4 of the Special Session.