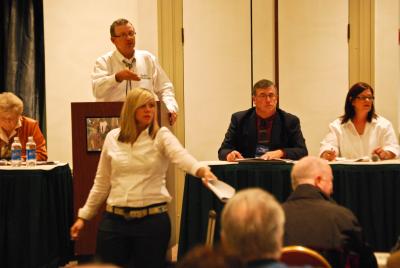 TULSA, Okla. – A bonus of approximately $1.7 million was raised at the oil and gas lease sales auction held during the annual Osage Oil and Gas Summit on Nov. 9.

The $1.7 million figure is nearly double the $864,940 raised during the 2010 auction. This year’s auction is the 13th one for the tribe attended by representatives from various oil and gas company representatives at Tulsa’s Hyatt Regency hotel. The Osage Minerals Council and Bureau of Indian Affairs oversaw the auction, which featured 160-acre tracts of land available for oil and/or gas mining.

“This year’s sale had a little over 100 tracts that fetched about $1.7 million, so needless to say we are all very pleased about the result,” said OMC Chairman Galen Crum. “All this points to the very high demand Osage oil leases are enjoying at this time. This demand is being fueled primarily by interest in pursuing horizontal drilling techniques into the previously underutilized Mississippi formation.”

Oil and gas company representatives from across the region attended the auction, now in its second year in being held during the annual Oil and Gas Summit. Representatives from Osage-owned Easley Auctions presided over the auction bids before announcing the winning prices from the successful bidders.

At this year’s auction, a record-setting $100,000 was offered for a land tract lease (for oil and gas combination purposes) by Southern Properties. Other bidding companies were Encana, Black Lava Resources, Kaiser Francis Anadarko and Performance Energy Resources. The lease duration is 18 months with a minimum price of $4,400 on most of the land tracts auctioned, which are nominated by producers, Crum said.

The successful bidder must pay 25 percent of all bonus bids today, said Melissa Currey, Superintendent for the BIA Osage Agency office in Pawhuska.

In his report on the auction, Charles Hurlbert, of the Pawhuska BIA office said there were “116 tracts for sale comprising 18,289 acres for oil and gas combination purposes and 13 tracts comprising 1,895 acres for oil mining purposes.”

The combined totals equaled a bonus amount of $1,701,585, said Hurlbert, who then told the OMC: “We recommend that you approve the sale.” Some of the leases were later dropped changing the figure to just under $1.7 million.

“The money generated from the sale are lease bonus payments and are included in the quarterly annuity payments along with the royalty collections for that quarter,” Crum said.

[Editor's Note: This story was updated for clarification.]