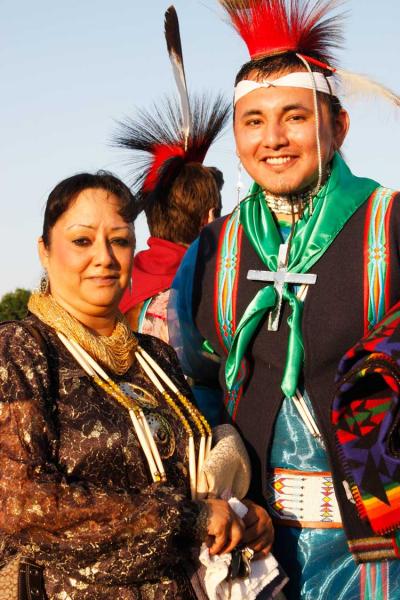 Pat Lewis knows a little something about “keen” dance outfits.

Since 1996 he has made it his business to embroider Osage dance clothes, or anything Osage that can be embroidered.

That includes (but is not limited to) shawls, skirts, women’s/men’s blankets, men’s dance suits, moccasins, leggings, hats (one of his embroidered hats is a part of the Osage collection in the National Museum of the American Indian), towels, tote bags, shirts, jackets, hand towels and more.

“I need advanced warning, as long as possible,” Lewis said. “I prefer not to have the Monday before Grayhorse (dances), which one of my relatives, who will remain nameless, asked me Thursday of Grayhorse if I could have something done before Hominy – and I had to tell them no.”

Based out of his home in Bristow, Lewis has many tribal customers from many different nations. Delaware, Kiowa, Creek, as long as the individual brings in the pattern and lets him know how they want it placed he can do it.

He invites all his clients to come in for a consultation before he begins. The client provides their own broadcloth and then picks the colors and pattern, which is then digitized for the embroidery machine.

His work has been featured in many Paying for the Drum ceremonies, either on women’s skirts or on women’s shawls, he said.

“Around Christmas, or after Christmas, I’ll check with potential clients and see if they still want something, don’t wait until May to come see me,” he said laughing. “My house becomes real hectic during May.”

Lewis also added that he refuses to work during the dances, since he is a member of the Pawhuska In-Lon-Schka Committee and dances at all three districts.