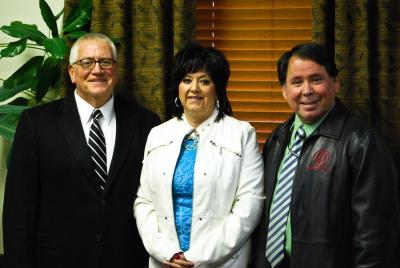 Ron Shaw, MD, Tim Tall Chief and Lynette Freeman have been named to the board created by ONCA 11-116. The board will be responsible for “consolidating and implementing the organizational structure of the Osage Nation Health and Wellness Division.”

At the board’s initial meeting Nov. 16, the board met to select its officers and review the legislation which states the board must have a minimum of three members but up to five can be appointed to it. The members are required to have experience in fields which include: public health and wellness; Indian health; medicine; pharmaceuticals; and mental health.

Tall Chief and Freeman selected Shaw as board chairman, which is the same post he held on the Nation’s Health and Wellness Advisory Board, which ceased in the 2011 fiscal year. Shaw recently started his new post as clinical director for the Citizen Potawatomi Nation Health Services in Shawnee, which comprises of two clinics.

Tall Chief, who also served on the Health and Wellness Advisory Board with Shaw, is vice chairman and also carries experience in public and Indian health issues. Tall Chief, who ran for Principal Chief in the 2010 election, previously served as deputy commissioner of health and administration for the Oklahoma State Department of Health.

Freeman has previously worked as a nurse for the Kanza Health Clinic, which serves the Kaw Nation.

Upcoming issues the Health Authority Board will consider will be implementing the process needed for the Nation to enter into a compacting agreement for the Indian Health Services clinic in Pawhuska. Under the federal Indian Self-Determination and Education Assistance Act, tribes have the options of contracting or signing self-governance compacts to have more control over providing health care to their people.

The board will also be charged with adopting policies and procedures to guide the operations of the Nation’s Health and Wellness Division facilities; be responsible for credentialing of the division’s staff; and to develop the division’s annual budget.

The next Health Authority Board meeting has been slated for Dec. 21 at the Executive Branch office in Pawhuska.