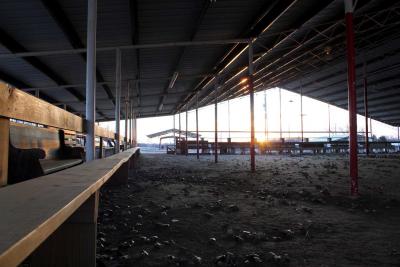 Osages may have a new structure to dance under at Grayhorse come June.

Legislation filed by Congressman Archie Mason Jan. 4 asks the Second Osage Nation Congress to give $550,000 to the Grayhorse Village Five Man Board for the demolition and construction of a new dance arbor in the Grayhorse Indian Village.

If passed, design and construction of a new arbor for the Grayhorse District, of which Mason is Head Committeeman, could begin immediately. The bill, ONCA 12-20, specifies the five-man board would be required to follow the Nation’s Competitive Bidding Act before choosing contractors for the project.

“The dance area will remain intact, we will not tear it up or damage the dance area. We’re going to expand it a bit, seating, for the Zon-Zo-Li and Wa-Ka-Ko-Li people,” he said. “All of this is coming together and we’re realizing the window of opportunity is quickly closing. We would like to have the old arbor down quickly, order the steel to make the arbor to put together, plus we know there’s a window of time for the construction companies to provide their estimates to build the new arbor. We still, and we want to have this up by May, by War Mother’s.

“We would really like to have this up by the War Mother’s Dance. And right now, we can do it. If everything falls into place we think we can get things ordered and get the contractors lined up,” Mason said.

The design for the structure has been discussed and approved in public meetings in the Grayhorse Village over the past two years. But, the design is not a traditional arbor that Osages currently dance under; it’s a roundhouse, but without the walls.

An old design made new

A roundhouse is nothing new to Osages, Osages danced in roundhouses for decades. At one time Grayhorse had the largest roundhouse of all three districts until it burned down in a massive fire in 1962. The year after the fire Osages danced under a circus tent and it wasn’t until 1964 that the current arbor was built.

“What I remember, we had that big fire out here and when that fire happened it spread from [U.S.] Highway 20 all the way to the Kansas border and got our roundhouse at that time and it went up in smoke . . . fast,” said Johnny Williams, Grayhorse resident and elder. “After it happened Osage women from the district got together and discussed what to do and got local people from around here and they built this [current] arbor.”

A new dance arbor has been talked about and debated for years, with arguments for and against it. Every June, with the interest to participate in the Osage In-Lon-Schka growing, dancers have crowded under the arbor, with difficulty at times. But what Mason and others were most concerned about was the current arbor’s debilitating support structure.

“It began with the big snowstorm we had a year, year and a half ago [Feb. 1, 2011], had all that snow and many of our people were concerned about the structure itself, it’s stability, is it still standing after all the snow – and it was,” Mason said. “However, on just visuals, we could see the support structure was damaged and we got through the June dance okay. But, we were concerned we wouldn’t be able to make it through another snowstorm because the stability was questioned.”

“We talked about it [a new arbor] some 18, 20 years ago, we’re excited this has come to pass, we’re patient enough – we’re very glad this is coming now,” Mason said. “If we’re successful, we’ll have a new roof over our heads come June.”