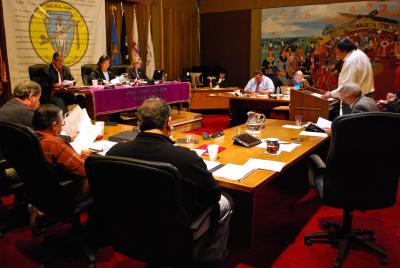 During the 14th Special Session, the Second Osage Nation Congress passed a resolution calling for a special election to be held Aug. 13. The special election date follows the recommendation of the ON Election Board, which decided on the Aug. 13 election during its Jan. 18 meeting.

There are six expiring Congressional terms up for grabs, so the June 4 ballot will contain names of those candidates seeking office and will also contain questions on seven proposed Constitutional amendments unrelated to the Minerals Estate.

The Election Board considered the number of ballot questions to be asked this year and decided the four Minerals Estate-related questions should be separate from the other questions. The board also pointed out that absentee voters would receive two general election ballots in the mail and felt the voters need time to study the questions before voting.

The board sent its Aug. 13 special election recommendation in a letter to Congressional Speaker Jerri Jean Branstetter.

“We feel that it is in the best interest of the Election Board office and the Osage voters for a special election to be held after the upcoming general election,” the Election Board said in its letter. “This recommendation stems from the possibility of voters having two absentee ballots in their possession at the same time which may lead to confusion as well as allowing sufficient time for the voters to fully understand the language of the proposed amendments to the Constitution.”

Approved by a 7-5 Congressional vote, the resolution (ONCR 12-06) was signed into law by Principal Chief John Red Eagle along with a $550,000 appropriation bill to remove and replace the Grayhorse Indian Village dance arbor. The Congress also approved that bill (ONCA 12-20) during the single-day 14th Special Session.

According to a Congressional fiscal analysis of ONCR 12-06, the Election office budgeted for a special election in its 2012 fiscal year budget, so no additional appropriation was needed during the special session.

Congressman Geoffrey Standing Bear, who sponsored the special election resolution, said the discussion in separating the Minerals Estate from the tribal government affairs is a long-standing one. “It is the view of many people that because of that special importance of that Minerals Estate, and how it is part of our government and part of our lives, that we should give certain things pertaining to it special attention,” he said of supporting a special election.

Congressman Raymond Red Corn also spoke in favor of the special election. “As many people point out, we spend a lot of money on this government and spending an additional $30,000 on an election to enhance the ability of all of our constituents, of all of our voters to fully understand the issues before them is very important and I think that is a big investment,” he said.

Congressman Eddy Red Eagle expressed concern that non-headright holders may hesitate to participate in the special election regarding the Minerals Estate-related Constitutional amendments because the headright holder issues do not affect them. “I believe it will bring on the feeling and emotion and the description: ‘this is a headright voter endeavor.’ I think that in itself will cause a lot of our non-headright Osages to shy away from that vote… I believe it can all be accommodated in the general election,” he said.

Congressman William “Kugee” Supernaw said the Constitutional amendment questions will be important to all Osages regardless of whether they are headright holders. He said combining the 11 amendment questions might create “a real confusing mess for our voters.” He also recalled voters receiving several pieces of information literature on the 2010 ballot questions and said voters could receive even more literature with the number of questions to be considered this year.

The start date for candidacy filing is March 15 and stretches through April 2. The Election Board’s Web site is at www.osagetribe.com/electionboard.

- ONCR 11-14 (Standing Bear) calls for deleting and revising Article XV which is “Management of the Osage Minerals Estate by the Osage Minerals Council.” If passed, the new section would replace the existing section titled: “Natural Resources and Minerals Management.”

The first section defines the Minerals Estate as: “the oil, gas, coal and other minerals within the boundaries established by the Osage Allotment Act of 1906 (34 Stat, 539), as amended, are hereby designated the Osage Minerals Estate.”

The second section states the OMC is “vested with the sole authority to lease and develop the Osage Minerals Estate and to administer the duties previously granted to officers for the Osage Tribe by the (1906 Act), as amended provided, the right to receive income from the (Minerals Estate) may not be diminished. The Minerals Council shall be protected by the laws of the Osage Nation.”

The third fourth and fifth sections define the OMC composition of eight council members (elected by the shareholders) who must meet the following qualifications to serve on the OMC: be at least 18 years of age on election day; have a certificate of Osage blood by the United States; be a shareholder and are members of the Osage Nation or Osage Tribe. The OMC members are elected to four-year office terms during elections held the first Monday in June, which coincides with the Nation’s general elections also held that day.