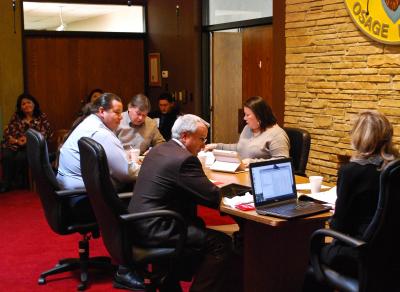 In wake of William Kemble’s resignation as Osage Nation Treasurer, the Second ON Congress ended its 15th Special Session investigation to determine whether Kemble should face a removal trial.

The Congress is also starting efforts to consider what its next moves will be regarding the Nation’s finances. The Congressional Appropriations committee has scheduled a meeting for Friday Feb. 17 to consider several financial issues, which may be impacted by the transition of the Treasurer position.

A bill has also been filed for the Congressional body’s consideration to amend the qualifications in hiring a Treasurer. If passed, it would require a minimum of five years experience in administering a government accounting system and certified public accountant credentialing.

On Feb. 9, the Second Osage Nation Congress voted unanimously to accept Kemble’s resignation and voted to disband the Select Committee of Inquiry which was set up to investigate the allegations made against him regarding recent office activities involving accounting practices.

The motions passed after Congress discussed the question of whether the Legislative Branch should act on the resignation since Kemble is an appointed official (subject to Congressional confirmation) working in the Executive Branch.

Congressman Geoffrey Standing Bear referred to the resignation letter addressed to the three government entities and said since the letter is addressed to him as an elected official, he will accept it.

Congresswoman Alice Goodfox, chairwoman of the Select Committee of Inquiry charged with investigating the allegations against Kemble, said Congressional action on the resignation would be appropriate so the committee could disband.

“(If) a resignation letter is sent to us, we therefore have the capability to accept (Kemble’s) resignation,” said Goodfox, “I’m looking to do that today so we can disband the inquiry committee and without accepting it, as a body, I believe then we’re not able to move forward to disbanding the Committee of Inquiry and we’re just dragging it out.”

Kemble was the second Treasurer in the reformed tribal government’s history and is the first appointed Treasurer to resign. Congressman Raymond Red Corn said the discussion is pertinent to the situation because it could set a precedent for any future resignations of appointed officials.

Congressman Eddy Red Eagle agreed Congress should not drag out the select committee process in wake of Kemble’s resignation. He then pointed to the future, regarding the Nation’s finances handled by the Treasurer, and said questions Congress should consider is: “What are we going to do about it? What are all the problems and analysis of it and where is this going to take us?”

The Congressional Committee on Appropriations (Red Eagle is chairman) later scheduled the Feb. 17 meeting to consider the Nation’s finances.

Congressional legal counsel Loyed “Trey” Gill said the subpoena orders would terminate with the committee’s business since it is no longer active. The Special Session ended that day.

Also on Feb. 9, Red Corn filed a bill (ONCA 12-25) to amend the Treasurer’s hiring qualifications, which are listed in ONCA 06-02 (the bill establishing the Department of the Treasury).

According to ONCA 12-25, the amended qualifications would require the Treasurer to have “a minimum of five years of experience administering a governmental fund accounting system” and Certified Public Accountant credentialing. The CPA credentialing is preferred but not a requirement for the Treasurer in ONCA 06-02. The bill is likely to be considered during the spring Congressional session.

The regularly held Hun-Kah Session of Congress starts March 19 for a 24-day period.