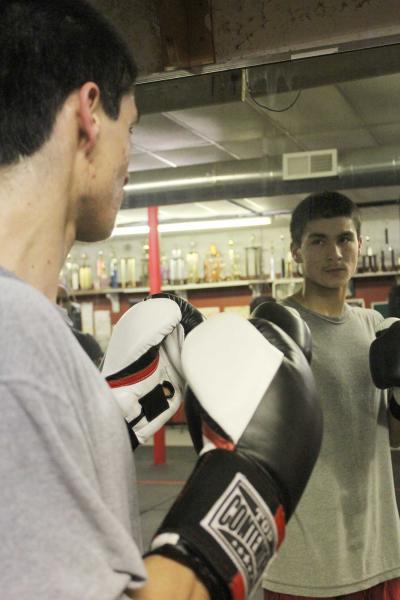 When the clock strikes 5 p.m. the streets of Pawhuska turn cold and one by one the street lights begin to flicker, as the evening grows bitter the light from inside Gilkey’s Karate studio outshines the rest.

The echoes of punches and jabs bounce off of the worn walls and mirrors throughout the depleted studio as the boxing State of Oklahoma Middleweight Champion Ben Cottingham swings at a punching bag.

Cottingham, Osage and Seneca-Cayuga, is the 6-foot-2, 165 pound illuminating glow in the studio that brightens the small town of Pawhuska.

For the past seven years he has spent countless nights in the studio training to be something bigger than himself and next week the long nights will pay off as he heads to Colorado Springs, Colo., to compete in the 2012 USA Boxing National Championships.

“I just try to be the best I can be,” Cottingham affirmed. “I feel like I already won, because I’m already, it’s already there, so why not just go out and get it.”

At 6 a.m. this morning (Feb. 24) the confident 20-year-old fighter and his trainer Earl Gilkey hit the road for the 11-hour drive to Colorful Colorado, where he will take the next big step in his boxing career and get what he is looking for.

The two are hoping for a couple of wins that will eventually land him a spot on the USA Olympic Men’s Boxing Team and a shot to compete in the 2012 Olympic Games in London this summer.

After years of training, building and sometimes falling, the two believe he can go all the way but they know it won’t be easy.

Like most fighters Cottingham has a tough story. He has fought through most of his still young life. Coming from a family of 11, fighting is all he’s ever known and now it’s all he cares to know.

The Osage fighter eats, breathes and sleeps training and fighting. He doesn’t play video games, he doesn’t hang out with friends, and he doesn’t watch movies. He fights and fights some more, but it didn’t start out that way.

Off the streets, into the ring

Ben Cottingham was born and raised in Pawhuska. He is one of nine children to Patricia and Charles Cottingham.

Like many youngsters who grow up in a small-reservation town he was always looking for something to do. He was a good basketball player but it never seemed to be enough.

In 2005, when he was 13 years old, he roamed the streets of Pawhuska in search of an outlet to release the pent up aggression he’s had since he can remember, and he found it at the Osage Nation Boys and Girls Club.

“I started at the boys and girls club, I probably had a lot of anger built up, I chose to do it, he (Gilkey) had karate and taekwondo and stuff but I just signed up for boxing…” he said. “I could take my anger out on it, just stress I guess. I just like to fight, I grew up with a bunch of brothers and sisters, we’d always fight, I just liked it and it just helped out a lot.”

Gilkey said Cottingham was like most young men his age. He enjoyed throwing a few punches here and there and fought when he felt like it.

He said at first Cottingham was unsure of himself as a fighter and would come to the gym off and on.

After a couple of practice sessions he set Cottingham up in an exhibition match in Bartlesville, but he didn’t do well.

“(I talked to him about) potential, commitment, what those things mean, (if) this is something you wanted to do I will take the time and work with you, I wanted to work with the kids, I was just putting it out there to him,” Gilkey said.

Cottingham wasn’t quite ready for a number of reasons. He wasn’t strong enough mentally or physically and his aggression got the best of him.

When he was 15 he was in juvenile detention due to his aggression and other things. After much counseling he decided it was time to make a change.

And Gilkey was more than willing to give Cottingham another shot.

“I’m the kind of person that will give you more than one or two chances,” Gilkey confessed. “…When he came back to me we sat down and talked about it again, I said we need to really commit to it now, I said you have some potential, now let’s do this here.”

Cottingham said boxing helped save him and because of it he’s come a long way.

“It helped me put my time into something productive instead of doing things that aren’t really worth it…it helped me, it helped me stay out of trouble…” he said. “Boxing did help me because now I don’t do things that I used to do, like do drugs, go out and party, I don’t do those things, I just stay home and workout and eat.”

From then on boxing became everything.

Cottingham became competitive when he was a junior at Pawhuska High School (he graduated in 2010).

He had his first “real” match around age 17 and the only thing that made him nervous was the crowd.

For him every match is the same. He goes in hoping to get at least one good punch in.

He said that he doesn’t remember when he decided to take boxing to the next level but he feels the need to keep going all the way to the top.

“I just try to block everybody out and just make sure it’s between me and him (his opponent), nobody else,” he said. “It makes me feel like I just need to keep going and keep trying, prove to myself that I can do it, prove it to everybody else. Just to prove I can do it.”

So far he’s proven a lot.

On Jan. 21 he won the regional title after defeating Arkansas’ No. 1 contender in a three-round decision. Entering the match his contender had 50-plus fights under his belt while Cottingham had only 14, but Cottingham didn’t know that until after he beat him.

“I just stayed in, didn’t give up, I took a lot of punches, hard punches cause it was my hardest fight,” he said. “I didn’t know he had that many fights and it seemed pretty cool.”

The boxer’s latest victory came just a couple of weeks ago when he won the State of Oklahoma Middleweight Champion title in Tulsa in front of a sold-out crowd.

Gilkey said over the years Cottingham has changed as a boxer and as a person. He said he’s still fairly shy and modest but boxing has helped him grow.

Gilkey said Cottingham believes in himself enough for it to carry him through a match.

He said at times when Cottingham is competing away from home Gilkey and his wife are often the only ones cheering him on in the crowd while the opponent has the support of more than half of the group.

He said Cottingham has a way of taking control of someone else’s crowd.

“The audience applauds the other guy before...but by then he (Ben) won half of the crowd, he likes that, he’s no going to tell you that but he likes the crowd,” Gilkey said. “He stole the thunder from the guy and brought it to himself, and I can see that in his eyes once the fight’s over, he has a smile on his face.”

Outside of Pawhuska, Cottingham is still an unfamiliar opponent, but to those who have followed the young Osage and his boxing career, he is their star.

Around Osage Country Cottingham has some big fans. They might not always be visible but they’re there and Ben knows it.

Just last weekend, some close friends and family had an Indian Taco fundraiser at Wakon Iron to help raise money for Cottingham and Gilkey to travel and stay in Colorado Springs for the Championships. The community took to the streets selling tickets for the dinner and accepting donations.

Osage artist, Ryan Red Corn, also pitched in by producing a short promo, done in two days, to help get the word out about Cottingham. The 2:28 minute video quickly spread on social media Web sites including Facebook.

It’s no secret that Cottingham has captured the hearts of his people and Native people almost everywhere, but it is his family who remains his biggest fan base.

Charles Cottingham, Ben’s father, said he was all but surprised to learn of Ben’s interest in boxing.

“I figured that that’s what he would do, he’s just exactly like me, he’s got an intensity about him, a drive, a non-stop intensity,” Charles Cottingham said. “I’m supportive of my son, I’ve spent a lifetime of fighting and I never gained anything by it, I just hope that he does.”

Charles Cottingham was once a boxer himself. He boxed while attending Chilocco Indian School but never went far with it.

Cottingham said he’s happy to see his son follow his dream but is more proud of his ability to stay humble.

“I want tot give Ben the support I never had,” he said. “As Indians we’ve always had a reputation for being quiet but after you’ve been around him for awhile you know that isn’t so, but my son really is a quiet person, I respect him for that, if he wasn’t my son I’d want him to be my friend.”

Gilkey said he’s happy that the community has stepped up to help Ben, just as they’ve done since he started boxing competitively.

“People are really rallying around Ben and helped out to the best of their ability, and we thank them for that, we’re going to thank them now and thank them when we come back,” Gilkey said.

Ben Cottingham said he’s also thankful to those who don’t support him. He said he’s learned to use negativity to his advantage.

“People that don’t think I can do it they’re still my support,” he said “They help me support myself to do it too, so whether they know it or not they’re still helping me.”

While Cottingham is in Colorado next week against the ropes or wrapping up another win his supporters will be right there with him.

To most, Cottingham’s trip to Colorado and later London seems like the ultimate accomplishment but Gilkey wants them to know that there’s still more come.

Gilkey said Ben’s Colorado performance is just a step in a five-year plan he and Cottingham have created for Ben.

“This step is a giant step, it’s good for his resume, whether he loses, ties or draws…next year I hope to turn him pro, then we want to continue to grow,” Gilkey said. “It’s not just tomorrow, or next week, I want to get a professional fighter out of Pawhuska, Oklahoma and ben is going to be that fighter and he can be.”

Between now and the Olympics in July Cottingham has three big competitions he wants to win.

And as always, Gilkey believes he can win all three.

“What motivates him is when you hit him in the ring, he has heart, he doesn’t back down, that is hard to teach,” Gilkey said. “I’ve had at least five champions but I haven’t had anyone at this magnitude for the Olympics.”

“He’s not just representing his tribe, he is representing Oklahoma, he’s the first Osage to really go this far. We’re gonna be bringing home the gold,” Gilkey added.

Next week those early mornings and late nights spent in the studio just off of Pawhuska’s main street are going to pay off for Cottingham.

The Osage people feel it and the Cottinghams know it.

And soon everyone will know about that beaming light out of Gilkey’s studio, that glow that stands 6-foot-2 and weighs in at 165 pounds.