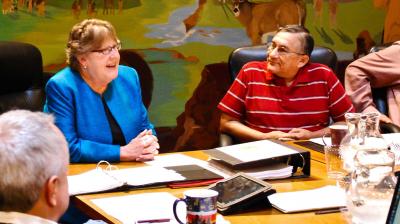 The Second Osage Nation Congress confirmed Callie M. Catcher as the Nation’s third Treasurer during its March 21 session following her brief interview with the legislative body.

Eleven Congress members unanimously voted the former Cherokee Nation Treasurer for the top financial officer’s post in the Osage tribal government. She was appointed by ON Principal Chief John Red Eagle for Treasurer – a job that oversees the Nation’s accounting and financial affairs and multi-million dollar operating budgets in the Executive Branch.

As Treasurer, Catcher (Cherokee) told the Congress she believes her job puts her in a position to give recommendations on investing the tribe’s funds in addition to overseeing the Nation’s accounting operations, which include recommendations and legislation set by Congress. The Nation has approximately $50 million in reserve funding which is the target of investing. “I would be very comfortable directing investments within parameters given,” Catcher said.

Catcher served as CN treasurer from 2007 until last year while former CN Principal Chief Chad Smith was in office. She oversaw accounting and financial support functions for all CN tribal programs with annual budget of $600 million, according to her resume. She also served as acting chief executive officer for Cherokee Nation Businesses Inc. and served as Secretary-Treasurer & Controller for the CN government before that.

Catcher’s confirmation comes more than a month after her predecessor William Kemble resigned from office. The Congress investigated Kemble for alleged questionable accounting practices and transactions, which included allegedly not following guidelines approved by Congress. Before leaving, Kemble left an updated policies and procedures manual with Chief Red Eagle’s office, which Catcher said she is reviewing.

“That’s one of my priorities,” Catcher said, “I will recommend changes where needed.”

Catcher said she would follow the current accounting policies and procedures until updated ones receive approval when questioned by Congress. “Yes, I’m used to strict compliance to what appropriate levels are,” she said of accounting rules, which include limits on signature approval of transactions.

Other Treasurer post focuses for Catcher include finishing updates to the Nation’s accounting books and upgrading the computer accounting system because the Nation used two accounting software, but a single software to manage the Nation’s funding received from tribal revenue and federal sources is needed.

Congressman William “Kugee” Supernaw said the Congress has learned the Executive Branch is hiring an outside accounting firm to help the Nation with its finances and the cost for using the firm, Montana-based Joseph Eve, could reach over $300,000.

“If they can perform what is laid out, then I think that is money well spent,” Catcher said of Joseph Eve. She also said she would work to do “everything I can to cut costs.”