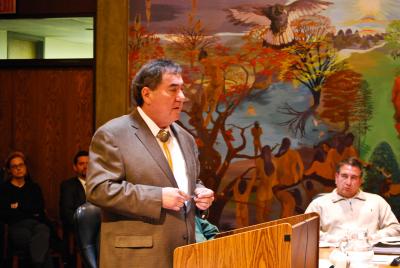 ON Congress votes down bill to dissolve Osage LLC

Amid concerns from some Congress members over the LLC’s reported money loses and number of Osages currently hired under the entity’s structure, the Nation’s economic development entity will continue operating, but its status and performance will be revisited next month. The LLC is slated to present an annual report to ON government officials with a Congressional meeting set for April 11.

The bill at issue, ONCA 12-29, failed with three "yes" votes, seven "no" votes and two absences during the March 23 session.

Congressman Geoffrey Standing Bear filed the bill, ONCA 12-29, in February citing reports that the LLC money loses total about $4.25 million and the LLC states that three Osages currently work among the 30-plus employees under the LLC and its subsidies.

Despite the reports, the LLC and its supporters say it is too early to pull the plug on the entity founded to handle business matters of the Nation independent of tribal government and gaming. Some Congress members also said they had yet to hear updates from the LLC and wouldn’t vote for its dissolution. Established by 2008 Osage law, the LLC said the existence of ONCA 12-29 was hurting business and its competitors were informing other companies of the potential dissolution.

Standing Bear, who was elected in 2010, said he was not involved in developing the 2008 LLC legislation and referred to the LLC figures before the final vote. “We can give each one of those employees (of the three LLC who are Osage citizens) a $1 million severance package and still save millions of dollars of the people’s money,” he said, “You gotta wonder how you got here. Well I wasn’t here at the time these laws were passed, I didn’t see anything in these laws that said ‘you could lose money for five years and you can hire minimal Osages for five years.’”

“I for one didn’t promise them five years and I’m not going to be bound by very bad decisions, my friends,” said Standing Bear who added he will not vote to give the LLC an appropriation if the entity requests supplements appropriation funding from Congress during its April visit with governing officials.

The LLC has received tribal funding to support its operations and investments (via Congressional appropriation bills) four times since 2008. Those contributions total $16.5 million. The LLC also received five property transfers from the Nation totaling $6.8 million which include the now-defunct Gift Shop and Palace grocery story in Fairfax, which is now on the market.

At the request of Congress, the Tulsa-based LLC staff submitted its employee demographics for its subsidiaries on March 14. According to the LLC, the company employs 38 people with 27 employees and 11 subcontract employees. There are three Osages employed in one entity each (Osage Data, Osage Innovative Solutions LLC and Osage Manhattan Builders LLC).

LLC board Chairman Charles Maker told the Osage News that ONCA 12-29 was hurting the LLC’s business affairs once its competitors got wind of it. In a March 22 Osage News Letter to the Editor, Maker said: “We have been conducting due diligence analysis and negotiating to acquire a profitable telecom company for more than a year, and since ONCA 12-29 was filed, the target company has demonstrated an unwillingness to consummate the deal, putting at risk hundreds of person-hours of internal and professional service firm effort.”

Maker said news regarding the LLC shared through political chatter and newsletters prevented a prospective LLC employee (who is Osage) from accepting a job offer, which would have raised that figure to four.

A motion to postpone the vote until March 27 also failed with three “yes” votes and seven “no” votes with two Congress members absent that day.

ONCA 12-29 was fasttracked during Day One of the Hun-Kah Session March 19, which meant the bill would not go to a subcommittee for initial review. The bill was sent to General Order, which concerned some Congress members wanting to hear more input before voting on the bill.

The Executive Branch did not comment on ONCA 12-29 before the vote, and Standing Bear said he wished to hear from Assistant Principal Chief Scott BigHorse, who was absent that day and planned to request a Congressional committee-of-the-whole that day for BigHorse to participate in the discussion. Congressman Mark Simms and Congresswoman Alice Goodfox were also absent during the March 23 session.

Congresswoman Shannon Edwards said a March 27 vote might not be possible with a committee-of-the-whole discussion on the same date. She added: “I’m concerned that we’re suspending our whole process to wait until the Assistant Chief gets back from (a) powwow and then have a discussion that doesn’t fit in with our process.”

Congressman William “Kugee” Supernaw said he wants the Osage public to hear both sides in the ONCA 12-29 debate, adding he’s received emails in opposition (to dissolve the LLC) from one family, which he did not identify.

Congressman Raymond Red Corn raised the same concerns of the LLC which is the dissolving bill is hurting its business. Regarding Supernaw’s comment on feedback, Red Corn says he’s heard from more than one Osage family regarding ONCA 12-29.

Red Corn said dissolving the LLC and starting up a new business venture afterward may not be successful. In his March 16 Update newsletter, Red Corn wrote: “What company with competent management would invest or partner with a tribal nation that had just pulled the plug on their 4-year-old diversified enterprise and announced a fire sale of assets with no warning? None. How long would it take for us to shake that reputation? How much longer will it take any subsequent LLC to build internal capacity and achieve success without partnerships and joint ventures?”

Edwards said she wants to hear from the LLC. “Who I want to hear from are from people who are answerable to the issues that is the LLC board and LLC management… What is helpful is having the people that work in the entity answer those questions.”

The failed motion to delay the vote sent ONCA 12-29 back to Second Reading where it faced a final vote.

Before the final vote, Standing Bear reiterated his concerns and also mentioned two unsuccessful business ventures of the LLC, which were the Gift Shop in Pawhuska and the Palace grocery story in Fairfax which is in the foreclosure process.

Maker said the LLC is marketing the Palace to potential buyers after the LLC bought the store back after Rick Parker, the previous owner who bought the grocery store from the Nation in 2009, got into trouble with the Oklahoma Tax Commission for not paying his taxes.

The LLC bought the store back in a March 6 auction as part of the foreclosure process through Osage County District Court. According to the Oklahoma state courts Web site, Palace LLC (the tribe’s corporation) bought the store for $397,679 at the auction.

The LLC shuttered the Gift Shop due to money losses. It was acquired from the Nation after the LLC was set up in 2009. “I think we deserve a chance and this LLC is losing our money and its closing down everything that it’s touched,” Standing Bear said.

Elected to the First ON Congress in 2006, Congressman Archie Mason recalls one of the first discussions on what the Nation should do if the tribe’s gaming revenue decreases which is used to fund several areas of governmental operations. “We’ll need some other source of income for this nation,” he said noting that five years later, “it’s a difficult time for our businesses… that is a challenge but we took it on,” he said of supporting the LLC.

The final vote on ONCA 12-29 repeated the same as the motion to delay it with three “yes” votes from Standing Bear, Supernaw and Boone and seven “no” votes.

Maker was not available for comment following the March 23 vote. Later that day, the LLC updated its Facebook page with the following status: “The board and staff of Osage LLC are grateful for the Nation's continued commitment to our structure and strategy, and we look forward to presenting our annual report on April 11. We welcome your questions and comments.”