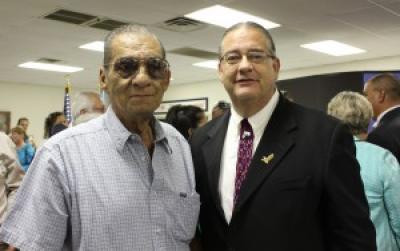 Surviving is: His daughter: Sammie Frost and husband, Steve; His grandchildren: Chelsie Radford, Tyler Frost and Chancey Frost; His great granddaughter: Kyleigh Radford; Siblings: Kenneth, Anthony, Aaron and Walt Bighorse; along with a host of nieces, nephews and other family and friends.  Lawrence was preceded in death by his parents and siblings Mary Rose Gann, and Paul, Bill and Douglas Bighorse.

Lawrence will lie in state at the Indian Camp Chapel.  Rosary will be recited Tuesday, March 27, 7:00 PM, at the Chapel.  William R. Lynn will officiate.  Traditional Indian services will be Wednesday, March 28, 8:00 AM, at the Chapel.  Mass will follow at 10:00 AM at the Immaculate Conception Catholic Church.  Father Chris Daigle will officiate.  Interment will be in the Pierce St. John Cemetery.  Additional honors will be provided by the Pawhuska Elks Lodge.  Military honors will be provided by the American Legion.