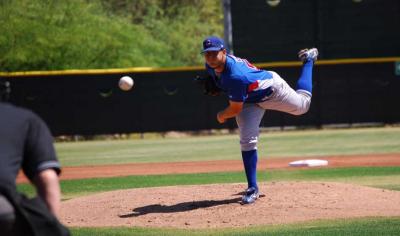 Kirk is the left-handed pitcher for the Daytona Cubs in Daytona Beach, Fla. The Cubs are the Class A-Advanced affiliate of the Chicago Cubs.

“It was a really big honor to be chosen since it is all the best players in the Florida State League,” Kirk said. “It is definitely a big accomplishment.”

The 51st All-Star Game was played at Charlotte Sports Park in Port Charlotte, Fla., on Saturday, June 16. Kirk was the starting pitcher for the game.

“It really is a great achievement and we are just really proud of him,” said Mark Kirk, Austin’s father.

Kirk’s parents and younger sister drove from Oklahoma to Florida just to watch him play in the All-Star Game.

“It was a 22 hour drive but it was worth it to go down there and watch him play,” Mark Kirk said. “It was a lot of fun and we really enjoyed it.”

Austin was happy to see his family in the stands cheering him on since he hasn’t seen them for several months.

“It made me feel like they really enjoy watching me play,” he said.

Kirk, 22, is from Owasso and attended Owasso High School. He was a stand out in high school and three-time state champion. The Daytona Cubs drafted him out of high school in the third round of the 2009 draft. He was the 109th overall pick in 2009.

He has established himself as “the ace of Daytona’s pitching staff” with a 2-1 record and 2.74 ERA (Earned Run Average) out of 10 starts through May 31.

“The 6’1, 200-pound southpaw has shown exceptional control, striking out 37 hitters against 15 walks and allowing just one home run,” according to a press release.

Kirk has held opponents to two runs or less in eight of his 10 starts. In his performance against the Clearwater Threshers on May 25, Kirk shut out the Threshers over eight innings on seven hits with no walks and four strikeouts.

Kirk was also a 2011 Midwest League All-Star for the Peoria Chief’s, an MiLB team affiliate for the Chicago Cubs. Kirk pitched a no-hitter in July of last year, only the 8th in MiLB history.

“Being named a 2012 Florida State League Mid-Season All Star is just one step closer to me fulfilling my goal of playing in the major leagues,” Kirk said.