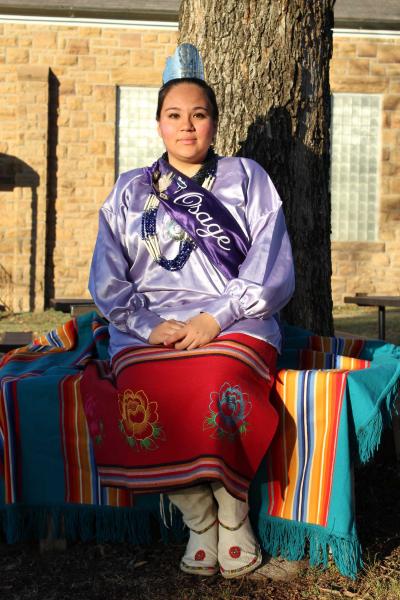 Williams, who is serving as OTP for a second time, will represent the Osage Nation as she attends the Expo in "Indian City."

Her family has organized an Indian Taco Fundraiser and Silent Auction July 19, to be held at Wakon Iron Hall in Pawhuska. It costs $7 for an Indian Taco, dessert and a drink, and the family will also be serving grape dumplings. All proceeds will go to assist Williams at the Expo.

Williams has been raised with traditional values and knowledge of the Osage culture, according to a prepared release. She speaks the Osage Language and has won awards at the Native American Youth Language Fair.

“She enjoys being the ambassador for her Tribe, because she gets to meet new people and make new friends,” said the release. Williams graduated from Pawhuska High School in May and plans to continue her education and be a positive role model for her younger brothers, sisters, family and friends.

Advance Grandstand admission bracelets for $10 can be purchased from any Tribal Director. The Osage Tribal Director is Angela Toineeta and she can be reached at (918) 885-2976. The bracelets are good for admission and parking on the east side of the grandstand throughout the Expo.

Kicking off the Expo will be a parade in downtown Anadarko at 10 a.m. on Aug. 8 and the closing parade will take place on Saturday, Aug. 11, at 10 a.m. All participants are welcome.

The Southern Plains Indian Museum will host the Tribal Princess Fashion Show on Aug. 8 at 3 p.m. The public is invited to attend and learn about the princess’s regalia and tribes.

The Expo will feature tribal presentations and dance contests at 8 p.m. at the Caddo County Fairgrounds.

Visit the Expo website at www.americanindianexposition.org for further updates.