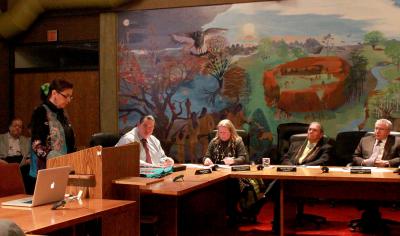 Election hearing brings voter and candidate issues back to forefront

An election hearing, aimed at getting answers to some of the alleged glitches with the 2012 Osage election, addressed comments and questions about the absentee ballot process.

The Osage Nation Election Board and the Osage Congressional Governmental Operations Committee hosted the hearing Feb. 12 at the congressional chambers with about 10 people in attendance. The meeting was broadcast live on the Nation’s website at www.osagetribe.com.

Testimonies were heard from past candidates and voters. The first testimony came from Olivia “Libbi” Gray, who ran for a congressional seat in the 2012 election and finished 13th out of 34 candidates. Gray took issue with the absentee ballots, allegedly arriving late to voters, giving them barely enough time to mail them back to the election office. She said her biggest concern were 600 absentee ballots not returned.

“The ballot envelopes mailed by True Ballot showed no dated postmarks or anything to evidence they were by sent by first class mail - as required by the Osage Election Law. From an accountability standpoint, we can only speculate as to whether ballots were mailed out on time,” Gray said. “This goes to the very heart of full faith of the Osage people in our electoral process. In any election, there will no doubt be voters, and candidates, who are disappointed in the outcome of an election. However, NO Osage should have serious doubts as to the integrity of the process itself. Would 600 votes have changed the outcome of this election? I think most reasonable people would answer ‘yes.’”

Osage Congresswoman Shannon Edwards, who was re-elected for a second term in the 2012 election and came in fourth, gave the only other testimony from past candidates. She said she felt the election office did a poor job of being available for candidates who lived outside the reservation. Edwards, who resides in the Oklahoma City area, said it was highly inconvenient for her to drive two-and-a-half hours to the election office for it to be closed upon her arrival when dropping off documents.

“On two occasions, I can tell you, the office was closed before 5 p.m., much to my chagrin,” Edwards said. She had been promised they would stay open until 5 p.m., she said.

Edwards also took issue with the election law requiring candidates to disclose who paid for their election literature and signage.

“Putting ‘paid for’ on the sign, I understand the goal, but I think we missed the mark,” Edwards said of the rule. “I didn’t think it was realistic and didn’t serve the purpose it needed to serve.”

Edwards and other candidates were repeatedly fined for breaking the rule during the 2012 election.

Osage voters were allowed to send in comments and questions via email for the hearing and most of the questions asked how the election could become more Internet friendly.

The board is researching online voting, according to Lockett. Also up for consideration: creating a permanent absentee voter database to cut down on requests sent in, considering a ballot machine used by most state and local government elections and researching ways to make the process more email friendly, she said.

Lockett pointed out with the election company they have used in both the 2010 and 2012 elections, Maryland-based True Ballot Inc., they have had no errors. In the 2010 election, Assistant Principal Chief candidate Everett Waller requested a recount after he did not advance to the run-off election. Joseph “Sonny” Abbott, who was elected to the Osage Minerals Council in 2010, stood as a watcher as the election board recounted the ballots. The number came back 100 percent the same.

She said ballot machines used in local and state elections have a 3 percent accepted error rate. Currently Osage voters fill out their ballot and put them into a metal locked box and then the ballots are scanned into a computer by election staff and a computer program designed by True Ballot Inc. counts them and shows the staff each ballot on a screen so staff can determine will of the voter if need be.

Lockett said in one case a voter had crossed out two previous selections and ended up circling the candidate they wanted and drawing an arrow to their selection writing, “I want this one.” She said with a ballot machine that ballot would not be counted.

Poll watcher for the 2012 election, Stephanie Erwin, said she had no complaints with the election board and thought they did an exemplary job election night. She was locked in the room with the election staff as they counted the ballots.

“I can assure you, no ballots were thrown away, they (election staff) went to meticulous lengths to make sure it was done right,” she said. “Walter Hopper (election board chairman) and his election board, and their integrity, is without peer. I’m glad we have them.”

Lockett said she contacted the Oklahoma State Election Office in January of this year and asked them what their return percentage on absentee ballots is. She said the office told her that for the January election they received 40 percent back, leaving 60 percent unaccounted for.

She said in terms of the U.S. Postal Service, the absentee ballot box is locked up in the post office and after it is retrieved on Election Day the election staff finds various anomalies in the box. In the 2012 election, she said credit card payments were found, child support payments, absentee ballot voter requests, various bill payments and more.

In response to Gray’s concerns over the 600 absentee ballots not counted, Lockett said, “Our sole purpose is that all eligible voters are able to vote.” And that the Osage election’s unreturned absentee ballot percentage compared to the state is much better.

“I would just like to assure you that we want your vote to count,” she said.

To Congresswoman Edwards, Lockett asked her if she voted for the changes to the Osage election code in terms of disclosing who paid for candidate literature and signage, Edwards said she did.

Erwin, who was a poll watcher for Nicki Revard Lorenzo in the 2012 election, said after the election, “I had two people call me and ask me to contest the election, and they were friends of mine. I told them I couldn’t because it was a good, solid, honorable election.”

The survey was accidentally mailed to underage tribal members due to an error with new software used by the Osage Nation Membership Office. Lockett said the error will not happen again.

The election office presented a power point presentation with statistics gained from the survey mailed to voters for the hearing.

A copy of the survey results is posted to the election board’s webpage at http://www.osagetribe.com/electionboard/.

Dates set for the 2014 Osage elections are: