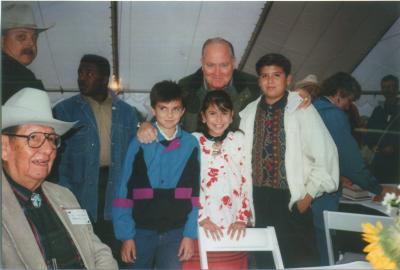 Gen. Norman Schwarzkopf, who died at his home in Tampa at the age of 78 on Dec. 27, 2012, was famous during the early 90’s for his leadership during Operation Desert Storm.

Schwarzkopf was a highly decorated Vietnam War veteran and rose quickly in the ranks of the U.S. Army during the 1970s and 1980s. He led the first coalition forces in the first Persian Gulf War. He drew up the initial plans for the successful U.S.-led ejection of Saddam Hussein’s forces from Kuwait, which Iraq invaded in 1990, according to nbc.com.

During that time it was common for any household in the United States to watch his almost daily-televised press conferences from Iraq. And late one evening, in the Standing Bear household in Pawhuska, Schwarzkopf was seen on a nightly news show claiming he was an honorary Osage chief.

“Right before Desert Storm, it was Desert Shield, it was days before, like 48 hours, it was like ‘20/20’ or one of those news shows in the evening, and they were having Schwarzkopf on TV, and one of the reporters said, ‘I see you have some eagle feathers by your communications consul,’ and he said, ‘yes, I am an honorary Osage chief,’” said Geoffrey Standing Bear, who was shocked to say the least.

Standing Bear was Assistant Principal Chief of the 28th Osage Tribal Council from 1990-1994, and is now an Osage congressman.

He then contacted then-Principal Chief Charles Tillman and wrote a resolution to be voted on at the next tribal council meeting. The council met and it was unanimous: Schwarzkopf was an honorary chief of the Osage Tribe.

“It was really cool because a lot of our Osage veterans came to the chambers that day in their uniforms to support the vote,” Standing Bear said.

Standing Bear was on the local Nature Conservancy board and they were planning a huge event for a bison release onto the tallgrass prairie, which was already gaining media attention. That was when he contacted Schwarzkopf’s adjutant.

“First I talked to Schwarzkopf’s adjutant, I explained to him where Osage names come from and about clans and asked him from which clan Schwarzkopf would like to be named,” Standing Bear said. “And the adjutant called me back and said Schwarzkopf wanted to be named from the Peace Clan. He said he’d had enough of war.

“Then I called the late Ed Red Eagle Sr. because he was head of Tzi-Zho Wa.Shta.Keh (gentle eagle clan). Ed gave him the name Tzi-Zho Ki-He-Kah, Chief of all the Eagles.”

Just before sunrise on Oct. 19, 1993, U.S. General Norman Schwarzkopf stood in a building on the Tallgrass Nature Conservancy while then-Assistant Principal Chief Standing Bear placed a purple Pendleton on him. The bison release was planned to take place after the naming and afterward there would be a reception. Osages and members of the public waited for Schwarzkopf in a large white tent.

Once the sun came up they formed a procession to the tent with Isaac Williams leading the way. Williams cried Schwarzkopf’s name four times, Tzi-Zho Ki-He-Kah.

“Isaac (Williams) led the way, ten paces back and in the center was Schwarzkopf, Eddy (Red Eagle) and Ed Red Eagle Sr., behind was myself, Everett and Jake Waller and then my sons Joseph and Ben (Standing Bear),” Standing Bear said.

As the procession reached the tent Williams cried Schwarzkopf’s Osage name to the four directions. Red Eagle Sr. blessed him and prayed in Osage. He then pronounced his name to all those in attendance and it was done.

“Later on that morning they released the bison, it was really nice. Hundreds of bison; they had this big fence, and all these tourists were up against this fence and all the Indians began to move back,” he said with a laugh. “It must be an inherent instinct or something, and those bison took off into the field. It was really something.”

Years passed and Standing Bear met a man who said he was responsible for Schwarzkopf thinking he was an honorary Osage chief. Standing Bear declined to name the man’s name for this article.

“He said no one was there, he was the only Osage, and he said, ‘Geoff, I thought no one would ever find out.’”

[Editor's Note: This story was updated for clarification on Feb. 15.]