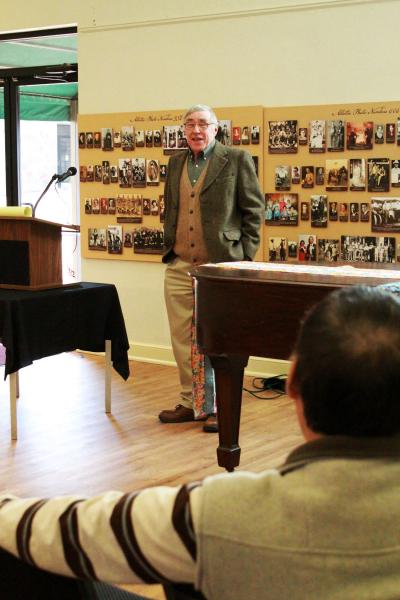 The Osage Book Club asked Dr. Garrick Bailey to summarize the works of Native American ethnographer Francis La Flesche to it’s members Jan. 25, after having finished all of his works on the Osage.

Bailey, a Professor of Anthropology at the University of Tulsa, specializes his research on the Osage and the works of La Flesche, who worked and lived among the Osage in the early 1900’s.

“There is no better, more accurate source on any tribe in the United States than La Flesche on the Osage,” Bailey said.

La Flesche was half Omaha, one-fourth Ponca and one-fourth French. He was born in 1857 on the Omaha reservation and participated in the last Omaha buffalo hunt around 1875 as a teenager.

He attended a Presbyterian Mission School located just outside the reservation. At night he and other boys would sneak out and go to Omaha functions, so he was never entirely removed from his Omaha way of life, Bailey said.

La Flesche grew up bilingual and had two sisters and a brother. His sister Susan La Flesche became one of the first women doctors in the U.S. His other sister Suzette was an interpreter for Chief Standing Bear (Ponca) and when Standing Bear was arrested in Nebraska for having left the Ponca reservation in Oklahoma to bury his son in their homelands, Suzette was his interpreter during his trial in 1875.

Time came for La Flesche to obtain his own education and he left the reservation and got a job as a copier for the Indian Service in Washington, D.C. While in Washington he studied linguistics with anthropologist James Dorsey, which are the works the Osage Book Club will read next.

While in Washington he made many contacts with scholars and anthropologists. He obtained his law degree at the National University Law School, which became George Washington University. In 1900 he wrote his first book, “The Middle Five: Indian Schoolboys of the Omaha Tribe.”

In 1909, with anthropologist Alice Fletcher, he published a massive volume on the Omaha. It was widely panned by critics for having been told from an Omaha point of view and not from an anthropologist’s view, Bailey said. He left the Indian Service and joined the Bureau of American Ethnographers for the Smithsonian. He is asked to go to the Osage and write a volume on their culture, as he did for the Omaha.

While working in Washington D.C., La Flesche had already met and became friends with Osage chiefs Black Dog and Saucy Calf. The Omahas, Osage and Poncas are all of the same Siouxan dialect, and as a student of linguistics it was easy for La Flesche to pick up the language and understand the culture, Bailey said.

“But when he got to the Osage he (La Flesche) found out if was much more complex than the Omahas,” Bailey said. “Osages were divided into 24 clans, meaning each ceremony had 24 parts.”

Bailey said that according to La Flesche, only the priest from a particular clan could perform the ceremonies, some prayers being close to 1,500 lines long. The organizational structure of the Osage was very complex but very unified.

By the time La Flesche began his book on the Osage in 1910, most of the 24 clans were already extinct.

According to Bailey, what made La Flesche a perfect interpreter was that not only was he Indian and understood an Indian way of life but he was gifted in linguistics and could interpret the intent behind the ceremonies. In 1903 La Flesche gave a talk called, “Who was that medicine man?” And in that talk he basically told the audience that you don’t really know a people until you find out what their basic beliefs are.

Bailey said La Flesche wasn’t fond of most interpreters and anthropologists, and said that most interpretations were, “something that no intelligent Indian will interpret as the true story.”

In 1923 La Flesche came to Pawhuska for the last time and stayed with Chief Fred Lookout and his wife Julia. From that visit Julia taught him how to prepare corn.

For a complete list of La Flesche’s works or information about the Osage Book Club and how to join, contact Welana Fields, ONHPO tribal research assistant at (918) 287-5307 or email her at wfields@osagetribe.org.