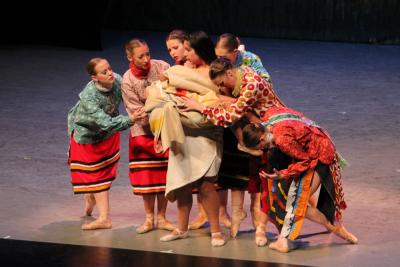 Four live performances of Wahzhazhe: An Osage Ballet are scheduled March 20-23 at the National Museum of the American Indian in Washington, D.C. and now fundraising efforts are underway to raise travel money for the ballet cast and crew to make those shows.

On March 5, the Arts & Humanities Council of Tulsa, in connection with Wahshashe director Randy Tinker Smith, will host a live art auction at its Harwelden Mansion, 2210 S. Main, south of downtown Tulsa. Art items up for grabs in the auction include those created by Osage artists.

This charity fundraiser event will be held from 6 p.m. until 7:30 p.m. The art auction proceeds will directly benefit the Wahshashe ballet dancers’ trip to Washington during the week of March 18 to perform at the Smithsonian NMAI.

The ballet performances are coming in wake of the successful live performances last summer on Bartlesville and Tulsa theater stages.

Tinker Smith said the NMAI performances will be free to the public so the cast and crew are responsible for raising its own funds to make the trip to Washington. She added the ballet performances would be a great opportunity to showcase the Osage Nation on a world level.

Those interested in sponsoring a ballet dancer or making a monetary contribution for the trip may write to the Arts & Humanities Council of Tulsa, 2210 S. Main, Tulsa, OK  74114 or make an online contribution at the ballet’s Web site at www.osageballet.com.

The March 20-23 ballet performances will be held at 3 p.m. each day. The Smithsonian NMAI Web site is at www.nmai.si.edu/home/.