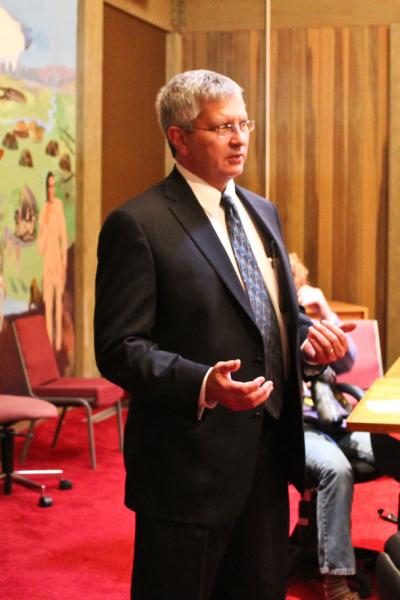 The Federal Bureau of Investigation may conduct interviews before completing its investigation into the former Pawhuska Indian Village Five-Man Board activities, according to Osage Nation Attorney General Jeff Jones.

The AG’s office and FBI are investigating activities and finances of the board after an ON Congressional audit was unsuccessful in accounting village revenue received from the Pawhuska Osage Casino lease. As a result, the Congressional Office of Fiscal Performance and Review reported it could not account for more than $806,000 paid to the village.

The AG’s office also investigated the village finances and will file charges in tribal court if warranted regardless of whether federal charges are filed, Jones has said. The AG’s office and federal authorities met two days earlier to share information on their respective agency investigations, Jones told the committee.

Jones, along with AG investigator Brian Herbert and ONPD Chief Nick Williams, met with the U.S. Attorney’s Office on Jan. 28 to drop off the Nation’s preliminary investigation report into the board activities. Cozzoni and FBI officials were present at the meeting, he said.

On the FBI side, Jones said the agency subpoenaed the bank records for the village account kept at Pawhuska’s First National Bank. He said the FBI has spreadsheets of the bank records but he didn’t know how far back that information dates.

Jones said the federal authorities would be in contact with him if they need to follow-up, including conducting interviews.

The authorities said “they would communicate with my office on anything needed if they were going to come up and do interviews, they would coordinate with us to let us know that they were up here knocking on doors,” Jones said. “I assured them we would provide interview space, probably the Sheriff’s Office… If they needed to interview witnesses or anything like that, they said they would contact ONPD or myself in advance of them coming up to interview potential witnesses.”

Jones said he has yet to set up a timeline with regard to the tribal investigation, but he expects federal authorities to take action by summer. “I don’t think we’re going to be waiting two years, I think they’re going to do something before summer, but that’s a guess on my part.”

Jones said he would follow-up with Cozzoni if no federal action is taken by summer. “And if they’re stuck, I may proceed. I’m trying not to do something that would jeopardize their prosecution because they have the potential remedy – they can get some federal (incarceration) time – all I can do is a year in the county jail. If they file, they can get up to five years federal time,” he said.

Congresswoman Shannon Edwards said she is concerned if the case lingers it may effect interviews conducted two years after the events in question took place. “I would hope that the U.S. Attorney would realize that this is an important thing for us and to let it languish too long” may impair the tribal investigation, she said.

Jones responded stating that interviews may not happen based on information obtained by the FBI. “The FBI (agent) told me he didn’t really have to interview anybody – the documents speak for themselves. With an embezzlement, he said he can run with what he’s got – he’s going to interview some people but he said basically the paper trail is what’s going to run this investigation.”

Congresswoman Maria Whitehorn, who chairs the governmental operations committee, asked Jones if he was expecting the outcome at the Jan. 28 meeting. Jones said yes.

Whitehorn has said she would be requesting updates from Jones’ office on the village investigation during the committee’s monthly meetings.

If federal charges are warranted on a person, authorities will refer the case to a Tulsa federal grand jury to decide whether to indict that person. The grand jury meets the first week of each month.