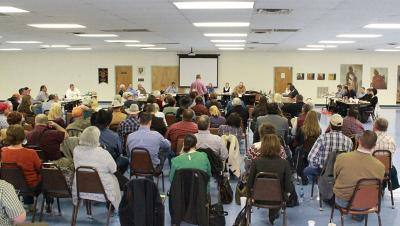 After a tumultuous Negotiated Rulemaking Committee meeting Jan. 25, where landowner after landowner said their complaints fell on deaf ears at the Osage Agency, a solution may be near.

Acting BIA Osage Agency Superintendent Rhonda Loftin said at a Feb. 20 Osage Minerals Council meeting that the Agency is implementing a tracking system for every complaint made, to track the problem from beginning to end.

“Someone had asked for a list of all the complaints that are coming in and we are working on that right now, I haven’t provided that to you, because we are working on implementing a tracking system database that will track from beginning to end each complaint. What the complaint was, where it was, what the problem is, and how quickly we reacted to those problems, everything,” Loftin said. “This tracking system will be inclusive of all of that. So as soon as we implement that you guys will really like to see that. You can pull reports from it; you can add forms in it. So we’re actually excited about this database.”

For decades landowners allege they have had little to no recourse when an oil company comes on their land and violates the Code of Federal Regulations. The CFRs govern all activity, including oil and natural gas drilling, on the Osage Minerals Estate and the minerals estate makes up the subsurface of Osage County. The BIA processes and issues drilling permits for oil producers drilling in Osage County.

As well as implementing a tracking system database, Loftin said they will also implement a hotline for all complaints.

“We’re talking about inputting a hotline number, we’re talking about implementing a call center that is inclusive in working with this tracking system. A person would take all calls, input all the information in and it will immediately send it out to all the field men and they will add what they did into that tracking system after they’ve done their part of it,” she said.

Osage shareholder, Stephanie Erwin, asked Loftin if the complaints addressed would only be specific to oil and gas. Loftin said it would be all complaints.

“Sounds good, we’ve needed something like that for a long time, obviously from what we’ve heard,” Galen Crum.

The NRC will be meeting Feb. 25-27 at the Wah-Zha-Zhi Cultural Center. The meetings are public.