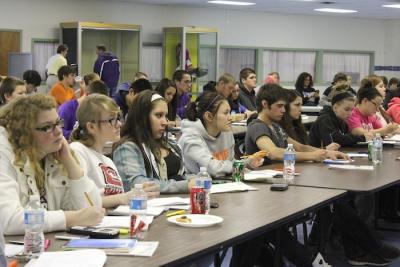 “I was very happy with the turn out,” said Ida Doyle, director of the Osage Nation Education Department (ONED). “It was a collaborative effort between the schools, the field facilitators, counselors, students and education department.”

Nearly 100 students from Pawhuska, Hominy, Woodland, Skiatook, Sand Springs, Shidler and Caney Valley attended the workshop. Half of the students were Osage.

“There was only one student who had ever taken a ACT prep course before,” said Cherise Lookout, ONED outreach coordinator.

This was the first ACT Prep Workshop the ONED has held. Breakfast, lunch and drinks were provided for the students.

Guest speaker Chad Cargill give a 3-hour Test Prep and Character Building Workshop for the students.

During the 2009-2010 school year Cargill presented 158 times to 10,648 high school students throughout the Midwest, according to chadcargill.com

Andrew Unap, Osage, attended the workshop and thought it was very helpful.

“I was pretty interested in the math section,” he said. “I would of probably struggled on the ACT if I didn’t show up to the workshop.”

Unap, 17, is a junior at Skiatook High School and wants to attend college.

“The Skiatook field facilitator told me about the workshop and I decided to attend because I am doing everything I can to get into college,” he said.

Unap believes that by attending the workshop, he can now take the ACT test with ease.

Cargill also went over scholarship applications and an opportunity for students to help raise money to purchase filter systems for families in need. The opportunity is called Cheetah Awards: Water for Life contest and any student that attends Cargill’s workshop can participate.

Last year students raised over $80,000, which helped purchase water filters for families in Kenya, according to chadcargill.com.

“I hope the workshop and the Cheetah Awards contest ignites that fire for students to take the ACT and take part in community activities,” Lookout said.

The idea to have an ACT Prep Workshop came from the school districts, Doyle said.

“The schools reached out to us at the education department and we saw there was a need for the workshop,” she said. “We thought we would help the schools since they can’t afford to do it on their own.”

The ONED decided to host the event on a Friday because it was the most convenient for everyone. Also, the schools districts were able to count it as an activity day and provide transportation.

“Opportunities like this allow us to catch students from an early age,” Lookout said.

Kiara Booth, Osage, is a senior at Hominy High School and attended the workshop to learn how to get a good ACT score.

“I liked how Chad was funny and kept us entertained while learning at the same time,” she said.

Booth said the math strategies she learned were the most helpful part of the workshop. She believes she will have an easier time understanding the math section on the ACT test now.

“It gave me an idea on what to expect on the ACT and I feel more prepared now,” Booth said.

Booth was surprised to see so many other students attend the workshop.

“I really didn’t think there was going to be a lot of students who attended,” she said. “But I thought it was awesome to see so many students and friends attend.”

Lookout said high school counselors have already asked when the ONED is going to host another ACT Prep Workshop.

“We plan to host another workshop and are looking into having a series of workshops so students can focus on individual subjects,” Doyle said.