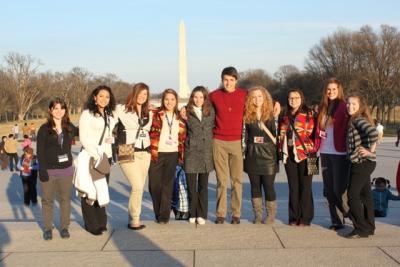 Osage students get taste of political atmosphere in Washington, D.C.

WASHINGTON – Ten Osage high school students are spending this week in Washington, D.C., learning about the U.S. Government and how it pertains to the Osage Nation a part of The Close Up program.

The Close Up program, a non-profit, non-partisan organization, helps students learn more about their history and government while considering a variety of viewpoints.

“Throughout the week, students explore D.C. and interact with students from across the country. With help of our program instructors, students consider how the people and events represented in Washington’s memorials impact their lives today,” according to closeup.org.

There are about 50 students in the program representing tribes from Oklahoma, Arizona, New Mexico, Wisconsin, Idaho, Washington, and Alaska.

Students arrived in Washington on Feb. 24 and orientation began that evening. The students were divided into four groups and assigned an instructor. The students played ice breaker games then discussed the rights and responsibilities of dual citizenship.

Students have 12 to 13 hour days packed with various visits, lectures, guest speakers and workshops for the week.

For Osage student Whitney Whitehorn, 18, the Lincoln Memorial was her favorite place the group visited.

“I liked the Lincoln Memorial because of the monumental moments in history like Martin Luther King Jr.’s ‘I have a dream’ speech and the Inaugural festivities of President Obama that have taken place there,” she said.

Whitehorn is a senior at Owasso High School.

For Jojo Horsechief, 18, Franklin Delano Roosevelt Memorial was her favorite stop of the day.

“The FDR Memorial was my favorite because of how it had physical art (touchable) and the way it was put together showing a mini timeline of history,” she said.

At NMAI, students had the opportunity to explore all four levels. Also, the museum had an Osage purse and a hand game set on display.

In the evening, students broke up into their groups and had a workshop on the Federal Government Structure followed by a tribal government activity.

The discussion was set up for students to ask questions and three Osage students, Jojo Horsechief, Hud Oberly and Emma Bigheart were brave enough to ask.

The panel discussed current Native American issues like teen suicide, school dropout rates, and how to stay connected to culture while attending college. They also touched on resources and what they are currently doing in Washington for Native Americans.

For example, Binney is a resource for the students on American Indian Law and policies. She was also staff director and chief counsel to the U.S. Senate Committee on Indian Affairs.

Chelsea Maker, 16, enjoyed the panel discussion and there were a couple topics that caught her attention.

“What stood out to me at the panel discussion were all the different projects that are going on in Washington, D.C., and that there were a lot of kids that have been affected by suicide,” she said.

For Emma Bigheart, 17, she didn’t know there were so many resources for Native people until she attended the panel discussion.

“I didn’t know there were many opportunities to make a difference for Native Americans in Washington, D.C., and it’s easier than you would think to contact a representative about issues you want to talk to them about,” she said.

This week students will also be visiting Capitol Hill, the World War II Memorial, the Vietnam Veterans Memorial, and Korean War Veterans Memorial. They will also attend a Bureau of Indian Affairs seminar with Bill Mendoza, who leads the White House Initiative on American Indian and Alaska Native Education. A College and Career Panel and the John F. Kennedy Center for Performing Arts to see, “Shear Madness.”

To see more photos of the student’s trip visit the Osage News flickr page at: http://www.flickr.com/photos/osagenews/.