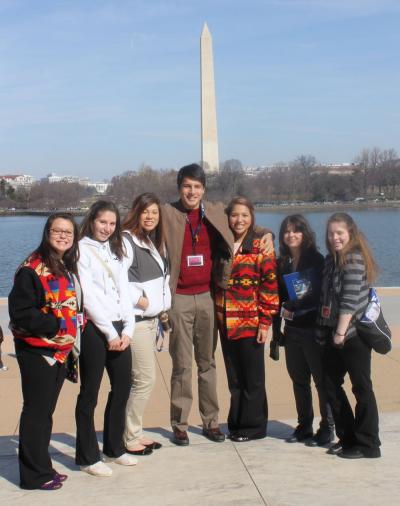 Through his school activities, cultural involvement and community services, Franklin “Hud” Oberly hopes to be a role model for youth.

“I’d like being a role model for youth because I have high expectations for youth,” Hud said. “I want to see them do good too and I hope they can look up to me.”

Not to mention, his name is short for “Hadebah,” which means, “someone you look up to,” in the Caddo language.

Hud (Osage/Comanche/Caddo) is a senior at Norman High School and maintains a 3.65 grade point average.

In January, he was selected as the Outstanding Native American Male Student in the Oklahoma City Metro Area. The award was presented by the Oklahoma City Powwow Club Scholarship Committee at their annual New Year’s Powwow.

“It made me feel really good to be selected for the award and it is the biggest award I’ve received so far,” said Hud, 17.

His entire family was happy for him especially his mother, Shannon Freeman (Caddo). She admits she beams with excitement when he received an award.

“I was thrilled when we got the news over Christmas break,” she said. “Hud has been provided with a lot of opportunity and he has met all of our expectations.”

Hud is from the Zon-Zo-Li’n District and participates in the In-Lon-Schka dances every summer. He has served as a water boy. He also participates in Caddo cultural events and the annual Comanche Homecoming.

He serves on the United Way of Norman Teen Advisory Committee and Oklahoma Heritage Museum Teen Board and has volunteered at the Jacobson House Art Center.

He was selected to participate in the College Horizons Summer Academic Prep Academy and the Close-Up/National Indian Education Association Program for Future American Indian Leaders sponsored by the Osage Nation Education Department in 2012 and 2013.

The first two years of high school basketball was the only thing that mattered to Hud. But due to injuries he had to quit playing.

“I believe everything happens for a reason and my injuries allowed me to develop myself in other areas,” Hud said.

“Hud had grown up in Norman and a lot of times the activities he is involved with, he is the only Indian student,” she said. “That has put a lot of responsibility for him to represent Indian people and he has done a really good job.”

“I think he is ready for the next step in his life which is college,” she added.

“I am really eager to be independent and live on my own,” he said. “But I couldn’t have done it without my family and I thank them for all their support.”

His great-grandparents are John and Sara Oberly and Tom and Reathia Cussen. His grandparents are Gary and Frances Kodaseet, Acey and Eva Oberly, and Bill and Brigida Freeman.