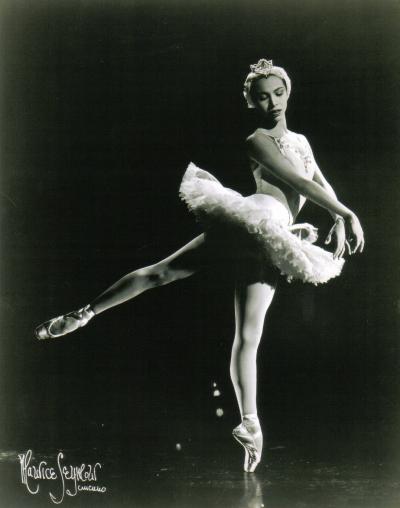 Maria Tallchief, one of America's first great prima ballerinas who gave life to such works as "The Nutcracker," ''Firebird," and other masterpieces from legendary choreographer George Balanchine, has died. She was 88.

Tallchief danced with the Ballet Russe de Monte Carlo from 1942 to 1947, but her career was most associated with the New York City Ballet, where she worked from 1948 to 1965. Balanchine, the Russian-born dance genius, was not only the company's director; in 1946, he became Tallchief's husband for some years.

She told Women's Wear Daily in 2003 that when she first worked with Balanchine she thought, "'I am seeing music. This is it!' I was a musician myself, and I thought, 'I am in my place now.' I knew that that's the way I wanted to dance."

Tallchief was one of five Oklahoma natives of American Indian descent who rose to prominence in the ballet world from the 1940s through the 1960s. She retired in 1965, when she started teaching the next generation of dancers.

"My mother was a ballet legend, who was proud of her Osage heritage," Paschen said in a statement. "Her dynamic presence lit up the room. I will miss her passion, commitment to her art and devotion to her family. She raised the bar high and strove for excellence in everything she did."

Tallchief created roles in many of Balanchine's ballets, including "Orpheus," in 1948, and "Scotch Symphony," in 1952. She was the Sugar Plum Fairy in his original production of "The Nutcracker" in 1954.

Tallchief was born Elizabeth Marie Tall Chief in 1925, on a reservation in Fairfax, Okla., a small town about 60 miles northwest of Tulsa. Visiting teachers gave her lessons, and her mother later moved the family to Los Angeles so that she and her sister could receive proper training.