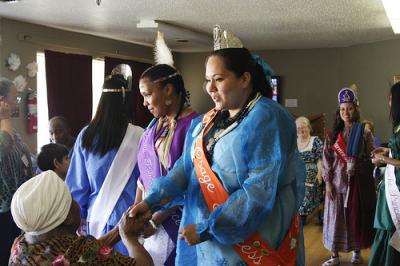 The 2013 American Indian Exposition, Osage Tribal Director, Angela Satepauhoodle Toineeta is announcing the Osage Princess Applications are available. There will be an election held May 18 at the Osage Princess Sorority Honor Dance to be held at the Osage County Fairgrounds Building. Voting will be from noon to 7 p.m., please provide your Osage Membership Card or CDIB - Certificate of Degree of (Osage) Blood to vote. The winner of the election will serve as the 2013 Osage Princess for the American Indian Exposition to be held Oct. 8-12, at the Grady County Fairgrounds and Event Center in Chickasha, Okla.

The sorority will honor 1963 Osage Tribal Princess Rosemary Shaw at the honor dance.