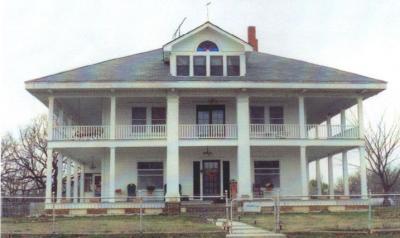 The setting for the film August: Osage County takes place in a large, three-story home where the dysfunctional Weston family is forced to overcome their differences after the disappearance of their patriarch.

Osages may not have been cast in the film but one of the main stars is the grand home in which the pivotal scenes occur. The film is adapted from the Pulitzer-prize winning play penned by Tulsa-native Tracy Letts. The film cast is a Hollywood who’s who of actors and actresses, most notably starring Meryl Streep and Julia Roberts.

Most of the filming occurred north of Pawhuska in September of last year in what is commonly known as, “the Boulanger house.” Built by Osage original allottee Isaac Walter Boulanger, the home is located 20 miles north of Pawhuska.

The three-story house is 365 square feet with a full basement, wrap-around porches with white pillars on both stories and sits on 22 acres. The home is a Sears, Roebuck & Co. kit home built by Boulanger in 1918. Boulanger expanded the roof to accommodate the porches, making for a large third story that served as a ballroom.

Isaac Walter was the son of Joseph Boulanger who was an interpreter for the Osage tribe while the tribe still lived in St. Paul, Kans. Joseph came to Indian Territory with the Osage in the late 1800’s with Isaac Walter. According to Ron Boulanger, his grandfather Joe served on the Osage council from 1889 to 1905.

The Boulanger’s settled in Indian Territory. Isaac Walter had a wife and six children by the time the 1906 Act was passed, making him and his children eligible to stake claim to the Osage Mineral Estate.

Two of Isaac Walter’s children died and so did his first wife, leaving him with their shares to the estate. It was with his second wife Grace he would pick out his grand home.

After allotment and the death of his parents, Isaac Walter settled on his 160 acres, platted the town of Boulanger in 1917 and named it after his father, Ron said.

In total, Isaac Walter had four wives. He had six children with his first wife, who died shortly after the sixth child was born. His second wife, who helped raise his first six children, helped him pick out the house that became “the big house.”

“With a team of horses and a wagon, he hauled the house piece by piece from Elgin, Kans.,” Ron Boulanger said. “He hired a guy to dig out a full size basement and he did it with a shovel and wheelbarrow, one guy.”

After the home was built Isaac Walter had grand parties on Saturday nights.

“It was a gathering place back in the late teens. Everyone would come around there Saturday night and drink iced tea. Because in the winter he (Isaac Walter) would cut big blocks of ice from the river and bury them with straw so in the summer they would have iced tea, it was a big thrill for everyone,” he said.

Isaac Walter also had his own baseball team, called the “Osage Reds.” The team played other towns in the area during the booming 1920’s.

The good times didn’t last long however, Walter’s health declined and a large fire swept through Boulanger and nearly wiped out the town. Isaac Walter moved to Kansas shortly after the fire in the mid-1920s and sold the home to a cousin. He would marry two more times, and with his fourth wife he had five children, which included Ron. Isaac Walter died in 1960 at the age of 81. Ron was 19 years old.

Ron said the Boulanger family hasn’t owned the home in years. The home has gone through three or four different owners before the movie production company bought it and sold it to an Oklahoma City agency after filming was complete.

“I would like to go in there sometime and see what all they have changed in there,” he said. “I’ve been in and around that house all my life.”

The film, in post-production according to IMDB.com, has a November 2013 release date.