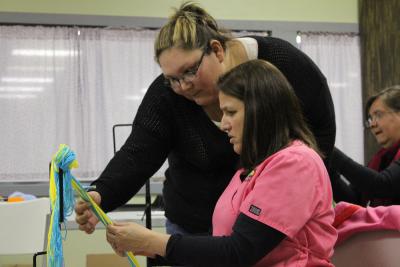 “Finger weaving is a dying art,” said Addie Hudgins, Osage cultural coordinator and instructor. “There are not many weavers left and very few who know more than just a couple of patterns.”

Hudgins learned how to finger weave about 12 years ago from Anita West, 74, who is a well-known finger weaver and instructor. However, due to arthritis, West no longer weaves.

West agrees with Hudgins that finger weaving is a dying art but believes the classes can save it.

“Finger weaving is needed for our Osage regalia so I don’t believe it will totally die out,” she said. “I hope the students will take a real interest in it and get it going again.”

Finger weaving class was the first class the cultural center offered and it use to be year round. However, due to planning, other classes and events, Hudgins hasn’t had the time to teach the class.

Hudgins said she would like to start teaching the class year round again and plans to keep it going as long as people attend.

“I believe it’s very important to have the class and encourage those that stick with it, because they are the ones that will help keep the art alive,” she said.

It isn’t known when Osages began finger weaving but it is agreed that it took place shortly after European contact, according to the book by Alice Anne Callahan, “The Osage Ceremonial Dance I’n-Lon-Schka.”

“Finger weaving is one of the most religious types of art done by the Osages, because the finger-woven articles are only worn at tribal dance time,” according to Callahan who interviewed the late Maudie Cheshewalla for the book.

“Among these finger-woven articles are belts, garters, sacred sashes, and the bags used to carry religious articles.”

West said finger weaving is practiced on acrylic yarn but wool yarn is most commonly used. In the early days, buffalo and human hair were used since wool yarn did not exist, according to Callahan.

The three basic patterns are diagonal, chevron and double chevron. The more advanced designs are the arrow, double arrow, triple arrow and the zigzag border.

“Once they are comfortable with one pattern, I have them move onto a more complex pattern and so on,” she said. “When they have learned all the basic patterns then they are usually ready to start a project (belt, streamers or garters).”

Hudgins admits it can become tedious and West says you have to have a lot of patience.

“You can’t just work on it for 15 minutes,” West said. “You have to set aside at least a hour or two to get anything done.”

The hardest part of finger weaving is figuring out how to position your fingers, West added. But that is where Hudgins comes in and helps students find the best way to hold their hands.

“Some people it comes naturally, and others have to work at it, but I believe everyone can do it,” West said.

West’s grandmother, Julia Lookout taught her to how to finger weave when she was nine years old.

“My grandmother use to finger weave and I became interested since I spent a lot of time with my grandparents,” she said. “I also learned from several other people including one of my aunts who was left-handed.”

“They made some of the most beautiful and intricate artwork,” Tiger said.

This is Tiger’s second try at finger weaving and she said the technique is hard.

“You have to know how to align the yarn, how many strands to use, what colors to avoid when you are a beginner and how to undo your mistake,” she said.

Her goal is to learn some of the techniques and eventually be able to make a belt.

“Everyone has a role, no matter how small, in keeping it (finger weaving) alive,” Tiger said.

Finger weaving class is offered in Pawhuska Tuesday-Thursday from 11:30 a.m. to 1:00 p.m. at the Wah-Zha-Zhi Cultural Center.

Classes will end before the In-Lon-Schka dances begin in June and will start back up in late July or early August.