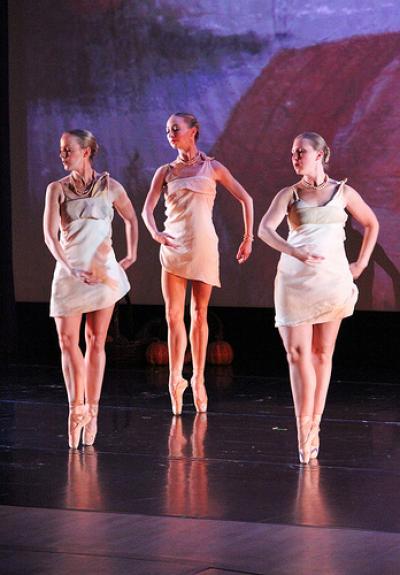 Osage ballet performs at National Museum of the American Indian

WASHINGTON – The Osage ballet received an overwhelming amount of compliments and standing ovations during their four-day performance in Washington, D.C.

Wahzhazhe: An Osage Ballet performed at the Smithsonian’s National Museum of the American Indian (NMAI) March 20-23 in the museum’s Rasmuson Theater.

"People loved the story – they loved the joy and felt a lot of the terror and sadness,” said Randy Tinker Smith, ballet director. “They also saw that we have persevered and continued as a people … they were really thrilled with that.”

After performing in Tulsa and Bartlesville, Smith was surprised at, “the healing that happens to Native people in the audience.” As well as the amount of non-Indians that took the time to learn about the Osage people.

“When we went to the Smithsonian I kind of was expecting that, but it went further reaching and I thought it was just an amazing exposure of our tribe to people all over. We even had Osages there from California and Florida,” Smith said.

More than 1,000 people attended the ballet over the four-day period.

“The show was a wonderful success,” said Janet Clark, NMAI’s cultural arts program specialist. “Almost full houses Wednesday to Friday, and packed on Saturday … we had to turn people away.”

Alexandria Badea, who is originally from Romania, attended the performance with her family on March 22.

“It was totally new to me and was very nice,” she said. “It seems like there is a desire to fight back and keep going … it is wonderful to see how new traditions and old traditions are combined.”

Badea also liked how there were children involved in the ballet and said her daughter couldn’t believe the dancers performed for an hour straight.

The dancers rehearsed for 14 hours a day for three days to make sure safety issues were handled before the performances.

“When we were traveling across the country to do this show we didn’t know quite what to expect and we had not been in this theater space before,” Smith said. “The theater space was about 15 feet narrower than what we had been in, which was a little dangerous.”

Also, an entirely new scene was added to the ballet and about seven smaller sequences in the ballet were rearranged.

“The kids (dancers) are professional and their hearts are really involved in our story because we have a lot of non-Osage dancers, but they are serious about telling our story and I think they worked really hard and did a great job,” she added.

“I think it is only natural seeing that the Tallchiefs (Maria and Marjorie) were prima ballerinas that an Osage story should be told through ballet,” he said.

Zotigh did say he saw a “positive transition” from March 21 to March 22 performances.

“The pairings of dancers changed, the transitions were much smoother and the continuity flowed better on Friday,” he said.

Smith understands where Zotigh is coming from and said they had to make adjustments. Also, the ballet lost some of their dancers and had to pick up new ones for the D.C. performance.

Terrance Stanton from Liverpool, Pa., was amazed by the ballet performance on March 22.

“It was completely unexpected, it was basically a classical ballet performance of such magnitude in addition with the overlay of the story of the Osage tribe,” Stanton said.

Stanton was visiting NMAI with his wife and just happened to hear the ballet would be doing a performance that day.

“The story was so impressive, so enlightening and such an enjoyment on so many different levels,” he said. “I had never seen anything like that what so ever.”

Smith even had people coming up to her after the performances in tears.

“One thing that happens, that I was surprised at, was a board member of the Kirov Academy of Ballet in Washington, D.C., came up to me in tears,” she said. “I had grown men crying coming up to me saying how beautiful it was and they didn’t know this about the Osage people.”

Furthermore, Smith said a lot of opportunities have opened up for the ballet dancers and artists.

“This was a good practice for us, taking the ballet on the road; and while we were there someone from the Colorado Ballet wants us to come to Denver and another group wants to take us to the Kauffman Center for the Performing Arts in Kansas City, Missouri,” she said.

Also, the Kirov Academy of Ballet is going to try and get scholarships for a couple of high school aged Osage children who are interested in the ballet, according to Smith.

To see a video of the ballet performing at the NMAI, visit the Osage NewsYouTube channel at www.youtube.com/osagenews.