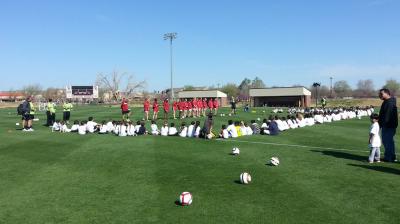 More than 100 Native youth from 31 tribes, ages five to 12, came from across Oklahoma to attend the Notah Begay III (NB3) Foundation Soccer Program, hosted by the OU women’s soccer team. The free camp began at 10 a.m. and ended at 2 p.m.

Joyce Oberly, whose 8-year-old son Jacob Law participated, said her son absolutely enjoyed the program and would do it again next year if offered. Law is Osage/Siletz/Comanche/Chippewa-Cree/Klamath and Northern Cheyenne and attends 2nd grade at Richmond Elementary School in Stillwater.

“I truly appreciated the fact that he was able to fully participate in the high caliber soccer clinic … for free! The clinic coordinators and instructors were very organized and kept the children moving through each station and building their soccer skill set. Being taught by college athletes was a thrill to Jacob,” Oberly said. “I try to impress upon him the importance of higher education. So he was able to see another aspect of college, athletics and the soccer program.”

The OU women’s soccer team showed the youth how to properly dribble the soccer ball, shoot the ball, the rules of the game, physical fitness and shared stories of their soccer success. The coaches divided the youth into groups according to age.

According to the NB3 website, each camp incorporates knowledge on nutrition and healthy living. Players learn the value of proper hydration, fruits, vegetables and exercise.

“I thought it was great seeing all those Native kids running around. Many different tribes were represented and it was good to see these kids just having a good time.  I think it is important to teach our young people to get along with people from other tribes and also important to be physically fit,” said Amick Birdshead, who had two sons participate in the camp. “I would like to see our tribes offer more sports camps and clinics, I know some offer the major sports but soccer is one that I haven’t seen.”

Randi Sunray, whose daughter and sons participated in the NB3 soccer camp, resides in Norman, Okla., and soccer is offered in junior high school but not elementary school. Her daughter Niigan, 12, sons Tdohasan, 8, and Kowi, 5, all participated in the camp. They are Kiowa/MOWA Band of Choctaw Indians and Ponca.

“This event is awesome, something positive for our kids to get them moving. They play soccer in a league, but rarely see other Indian kids. It was nice to see so many kids and the families who support them staying for the entire clinic,” Sunray said. “My kids loved it, they had fun! Every time I saw them, they were smiling ear to ear.”

According to the NB3 website, the NB3 Soccer Program’s mission is to grow the sport of soccer in Indian Country as a means of obesity and diabetes prevention and for youth leadership development. Soccer is a global sport, and while up until now access to this sport has been limited in Indian Country, it has an incredible potential to become a cost-effective and major force for promoting physical activity and preventing childhood obesity and type 2 diabetes.

“My kids would definitely attend another clinic,” Sunray said. “This was a positive day filled with laughter and sweat for our young Indian kids! There were some definite athletes out there that day.”

For more information about the NB3 Foundation visit its website atwww.nb3foundation.org.