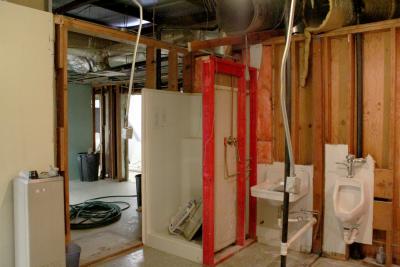 By the end of June, patrons of the Osage Nation Fitness Center will have new and bigger locker rooms, tanning rooms and a remodeled fitness room.

Phase II renovations at the fitness center are expected to be complete in mid-June.

"Everything appears to be on schedule and we have not run into any problems,” said Bruce Cass, director of the Osage Nation Tribal Development and Land Acquisition Department.

Phase II renovations began April 24 and are taking place on the north and south side of the fitness center.

“The fitness center is getting a facelift which will have a nice, inviting feeling opposed to before,” Cass said. Before many of the ceiling tiles were missing, broken equipment laid strewn about the facility and the locker rooms were too small and inefficient. All were fixed during Phase I renovations.

For the upcoming summer months, where temperatures could rise to 103 degrees at times inside the fitness center, the heating and air conditioning is being replaced with energy efficient new systems. Last summer employees had to repeatedly close the center due to the unsafe temperatures.

The metal entry doors will be replaced as well, with storefront glass doors, Cass said.

“Since the Fitness Center is a commercial facility we have to make sure everything satisfies code regulations,” he said. “We are making sure the fitness center meets the International Building Code as well as appropriate changes to meet ADA accessibility requirements.”

The men and women’s bathrooms, which did not meet ADA accessibility requirements according to Cass, are being remodeled. The bathrooms will also have better airflow, along with showers and locker rooms.

Furthermore, areas of the parking lot where the asphalt is damaged will be fixed.

“We’re excited about all the new changes and are doing the best we can to stay open during the construction,” said Kenny Bighorse, ON Fitness Center coordinator.

During Phase I of renovations the fitness center had to be closed for nearly a month due to work being done on the main floor.

Since Phase II renovations are on the north and south ends of the building, the areas can be closed off allowing the fitness center to remain open, Cass said.

“The construction hasn’t hurt the flow of people coming in to workout,” Bighorse said. “The only inconvenience is the fitness room cannot be used right now, but it’s only temporary.”

The fitness center however did have to close for one day due to electrical work on May 17. During this time four fitness staff employees traveled to Topeka, Kans., for certification training.

Cass, Bighorse and Osage Nation Principal Chief John Red Eagle are looking forward to the completion of the project.

“We are looking forward to the completion of the Pawhuska Fitness Center,” Red Eagle said. “Having a nice facility is another step toward improving the health of our employees and Osage people.”

The Fitness Center sees more than 100 Osage Nation employees a week, according to sign-in sheets at the center. Employees are allowed to workout for 30 minutes during the workday as long as they sign in and have approval from their director. The fitness center also has more than 50 regulars.