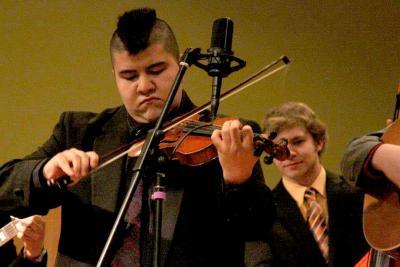 For Nokosee Fields, life doesn’t get any better than cooking Thai food and playing the fiddle.

A 23-year-old Osage fiddle player, he will be playing in England this summer at the 49thBillingham International Folklore Festival, Aug. 10-17 with the Bailey Mountain Cloggers from Mars Hill, N.C.

“I feel grateful, honored and very excited of course,” Fields said. The group will be playing for the festival’s dancers.

Roy Andrade, one of Fields’ professors at Eastern Tennessee State University (ETSU), selected him for the opportunity.

“I chose Nokosee because I feel that he will not only be a great asset to the group musically, but I think the experience will be one that he can fully appreciate, especially the intercultural aspects of it,” Andrade said.

Fields began playing the fiddle three years ago but he was no stranger to learning a string instrument. He played the violin for 13 years. He also plays the guitar, bass, mandolin, and is trained classically in operetta.

“When I was 10 years old I picked up my sister’s violin and just started playing it,” Fields said. “Before that I don’t recall being terribly into music.”

Fields is pursuing a degree in bluegrass and old time music with an emphasis in early American fiddle music at ETSU. He just finished his first year and is the only Native American in the program.

Light and Hitch, an old time band, have shaped a lot of his influences, but his biggest influence has been his fiddle instructor Joseph Decosimo.

ETSU’s bluegrass, old time and country music studies have thrived on the philosophies of preserving the musical traditions rooted in Appalachian culture, while at the same time encouraging creativity and development of prevailing styles, according to www.etsu.edu.

He first attended Oklahoma State University where he was studying vocal performance with an emphasis in renaissance choral music. But decided to take a four-year break before attending ETSU.

During the four years he took off from school, he traveled, met new people and explored different types of music. It was in Colorado where he realized he liked bluegrass.

“I was really attracted to the small acoustic ensemble and I wanted to start working the fiddle,” he said.

He has since joined three school bands and is involved with three projects outside of school.

Furthermore, he placed first in the adult fiddle contest at the Appalachian State Fiddlers Convention in Boone, N.C., in January.

“We were originally there for a band contest and decided to enter in the adult fiddle contest,” he said “There were about 17 contestants and I was definitely surprised when I won first.”

Fields played an original tune called, “The Tahlequah Crawdads,” which reminded him of growing up and going to Tahlequah to catch crawdads with his siblings.

Fields grew up in Stillwater and is the youngest of three. His parents are Tom (Cherokee) and renowned Native American artist Anita Fields (Osage/Creek). His siblings are Welana Fields, who works for the Osage Nation Historic Preservation Office, and Yatika Fields, one of Indian Country's rising artists.

“He is one of those people that can pick anything up and learn it instrument wise,” said Welana Fields, Nokosee’s sister. “He is really interested and very compassionate about what he does.”

Fields is proud of Nokosee and supports him 100 percent. She also tunes in when she can to watch his performances and has seen an improvement in his fiddle playing.

“Seeing him from Christmas to now, he is amazing,” Fields said. “I love seeing him grow and just blossom every day.”

Fields also said their father has a whole library of Nokosee’s performances and even makes CDs for their grandmother.

“The idea of blue grass and traditional music is a culture and profession out here (Tennessee),” he said. “I don’t think these opportunities would have happened in Oklahoma.”

Fields is also working on getting more gigs lined up, but in the mean time he will keep his day job working at a Thai restaurant.

“Pretty much all I do is cook and make music, which is a little too good to be true,” he said.

Fields isn’t too sure when he will be finished with school since he would like to earn a Ph.D. But in the future he’d like to travel with a group and perform.

“I think school is going to be in the cards for a while … I like studying,” he said. “Plus, good opportunities come out of it.”